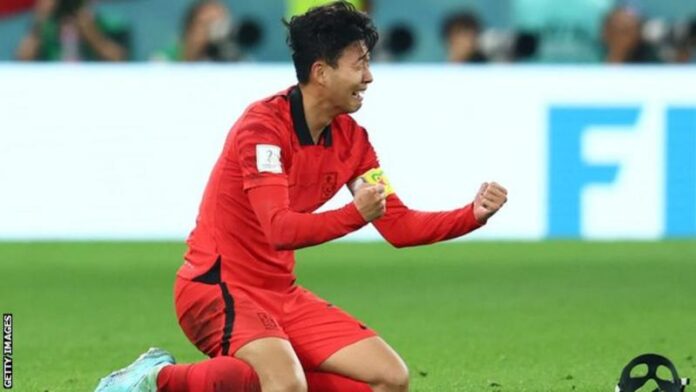 At one stadium there were tears of joy for South Korea. At the other, Uruguay’s emotional players attempted to process what had just happened to them.

As yet another group reached a dramatic conclusion at the 2022 World Cup, it was Son Heung-min and his team-mates who were overwhelmed with joy as their place in the last 16 was finally confirmed with a 2-1 win over Portugal.

An inconsolable Luis Suarez and Co were left in disbelief at Al Janoub Stadium after Hwang Hee-chan’s injury-time strike had left Uruguay one goal short of qualification, despite a 2-0 victory over Ghana.

It was roughly eight minutes after the final whistle at Education City Stadium when South Korea were able to get their party started.

Their players and coaches had followed the end of Uruguay’s game with Ghana in a mass huddle on the pitch – and their thousands of fans in the stands had done the same.

They were gathered in huge groups and watching on tiny screens, all with their head in their hands, willing the African side to hold out.

When it was all over, there was an outpouring of sheer relief. You didn’t even have to see it for yourself – it was obvious from the deafening roar that came from their supporters and the entire squad, swiftly followed by a dance of delight.

The South Korea fans had actually been bouncing about all day, remaining excitable when their team fell behind early on or when they were labouring in search of a winner in the second half.

Iconic striker Son created the dream finish they craved, setting up Wolves frontman Hwang to score the stoppage-time goal that was just the start of their happy ending.

Some fans around me were aware that put them above Uruguay on goals scored, others just knew they now had a chance of qualifying. All of them were anxious as they awaited their fate.

Below us, the players stood motionless too until the end of Uruguay’s hopes brought an amazing explosion of emotion that will live long in the memory of anyone who witnessed this remarkable finale.

When the news came through, the emotion hit and Tottenham’s Son Heung-min was left in tears

Uruguay and Ghana have met twice at the World Cup and both matches have produced incredible drama that will be talked about for years to come.

Pantomime villain Luis Suarez was the main focus before the game, with Ghana fans vowing to gain revenge for 12 years ago, when he handled the ball on the line and was sent off, before Asamoah Gyan missed the resulting spot-kick.

Ghana went out that day on penalties and although they also exited on this occasion, there will be some crumb of comfort knowing they took Suarez and Uruguay down with them.

Seven minutes were added on and, as news filtered through of South Korea’s victory over Portugal, an image flashed up of Suarez sitting on the bench in disbelief.

Ghana fans cheered loudly at his misery, which was compounded at the final whistle when they failed to find an elusive third goal which would have sent them through.

Denied a late penalty when Edinson Cavani felt he was fouled in the box, Uruguay took out their fury and frustration on the match officials in an unsavoury ending.

Suarez, 35, was in floods of tears at the end, consoled by 36-year-old centre-back Diego Godin, and both players may well have played their final games for their country.

Asked about his own future, boss Diego Alonso said: “It is too early to talk about it. Let us wait for hours, days and then we will discuss. It is not to time answer such questions.

“On the first day I believed in my players. We were seventh [in the South American qualifying group] when I joined but they responded well with results and good football.

“I am thankful for what they did and everything we did on the way was perfect. I deeply regret we are out of the World Cup.”

Substituted in the second half, there was nothing Luis Suarez could do as he watched on from the bench

The Uruguay players immediately surrounded the referee at full-time, with Edinson Cavani receiving a yellow card for his protests

The Uruguay players immediately surrounded the referee at full-time, with Edinson Cavani receiving a yellow card for his protests

Uruguay fans in the crowd could not quite believe what had happened as their side exited the tournament.

Uruguay fans in the crowd could not quite believe what had happened as their side exited the tournament.

Tenants Union of Ghana endorses the launch of the National Rental...