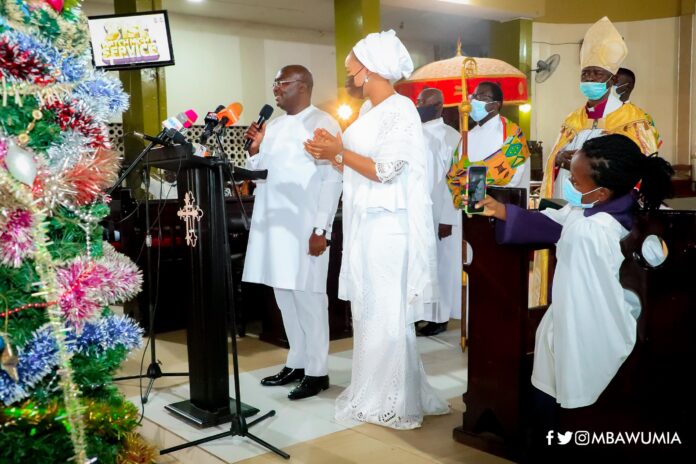 There is absolutely nothing wrong with Bawumia visiting or worshiping with Christians likewise there would be no wrong if Alan or Mahama visit or worship with Muslims.

Ghana is a secular state with Christians Major and Islam Minor. It is important to also state that Abrahamic Religions in chronological order of founding are Judaism led by Moses, Christianity led by Jesus Christ, and Islam led by Muhammad.

Both Ishmael and Isaac(the Covenant Child) are all biological sons of Abraham.

Muhammad is linked to Ishmael through the lineage of the patriarch Adnan.

Jesus Christ is linked to Isaac through the patriarch David.

Christians were the first people who received Muhammad in Madina when he runs away from Mecca to Madina for safety.

The first covenant agreement between Christians and Muslims for peaceful co-existence and tolerance was signed by Muhammad and Najran Christians in Madina.

The 1992 Constitution of Ghana has stated clearly that no person should be discriminated against on the basis of Religion.

Tribal Politics and Religious Politics are illegal under the 1992 Constitution.

A Muslim leader would need Christian Votes to succeed.

A Christian leader would also need the votes of Muslims to succeed.

According to Hebrews 12:14, “Pursue peace with all men, as well as holiness, without which no one will see the Lord”.

ALSO READ  Razak Kojo Opoku Writes...Mahama and NDC Propose 3 different taxes & IMF to replace E-LEVY
AMA GHANA is not responsible for the reportage or opinions of contributors published on the website.