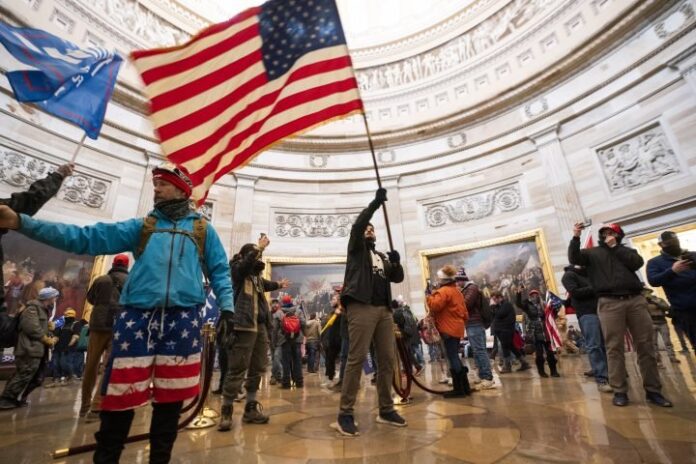 We saw the Suppression of democracy and abuse of people’s free will to express themselves, not only in the so-called Third World countries but inside the Congress called the Bastion of Democracy: shaken six years ago, four years ago and a few months ago that ended in Impeachment. Yet, the determination of the unruly minority overwhelmed the majority in the world’s most admired country, a couple of days ago.

We had witnessed the ugly side of power and how power absolutely corrupts. We were led to believe that struggle for power, thuggery, and inability to concede to winning opponents only happen in Third World countries. It was just a matter of time before gerrymandering, Electoral votes preference over popular votes and party selection of Prime Minister show the strains of this weary thing called western democracy.

Actually, the days of naked vandals looking for countries as protectorates and religious converts may be old-fashioned; they now come in disguise as foreign aids, loans, and technology transfer. Just like the old religious baptism. The better result has been achieved by preaching freedom, democracy or communism, and Peace. Peace by insurrectionists that invaded the so-called bastion of democracy in the United States Congress.

Compare that Peace to the way Black Lives Matter Protesters were treated by Police in Ferguson and elsewhere in the USA. The popular votes most Western democracy depend on to express the wish of the people has been compromised and even usurped by the disproportional representation of the privileged and powerful in their Houses of decision-makers.

The recent elections in Britain and the United States have exposed the frailty of humans no matter where we are. If we add the nefarious surveillance and subtle interference of Russia and China, not only in the developing countries but boldly in Britain’s Brexit Referendum and the United States Election in 2016, the pictures become clearer.

The repercussions of Brexit majority Government of Deal or No-Deal and the American 2016 Election will be felt in years to come worldwide. So much so, as people of goodwill wonder if we have actually progressed beyond the ancient mentality of the survival of the fittest. We like to portray ourselves as civilized but acted beastly when we became desperate to retain the grip on power and the privilege it provides, no matter what.

It is hypocritical to claim the parties that benefited from Russia’s activities did not realize it as they ignored all counterintelligence. The reason is clear when the white majority are comfortable, they are assured of the votes since the minority votes posed no threat. When the numbers of minorities increased in Britain and the United States: the US President preferred the immigrants from Norway to boast their white population.

Britain wanted to shut out more immigrants from poor European Union, Arab and African countries but trade with Canada and the USA. If Russia’s overt surveillance helped achieve the same objectives during the Election or Referendum, so be it. These problems indicate what we witnessed in dictatorships and in those countries that choose their religious leaders and Dictators as Head of State.

Democracy, Dictatorship, Theocracy, and Military rule by the privileged have become distorted. Whoever rules, Police and Military are used to suppress the silent majority in order to retain power. The unfortunate truth is that those with superior powers of violence still dominate most world communities no matter where we are. There is no one, people, or power that has a monopoly on violence.

It has gripped most communities to an unprecedented level in the so-called civilized or modern climes. Peaceful demonstrations have led to riots when forcefully put down by Police that have eventually led to anarchy while repulsive local terrorists get away with bombing buildings down. Especially when these familiar right-wing forces that invade and threaten peaceful protests are bent on controlling opponents they disagree with.

The collateral damage has not ceased, particularly in the Middle East where SuperPowers test their might and send messages to internal and external “foes”. It is now a fact that once a country developed nuclear weapons, they are safe from arbitrary attacks based on fiat, economic domination, and dictations from the economic powers looking for free and cheap labor.

What this has led to is the creation of additional SuperPowers from China spreading to Korea and the Middle East. Chairman Mao of China made the choice between famine and nuclear power until his country achieved both. He concluded that no economic power was worth it’s salt if China could not protect itself from vandals or soldiers of Fortune. Any surprise that North Korea is following the same doctrine?

In a democracy, the rich exploit the poor and in communism, the poor exploit the rich. These consequences are not that different since both forms of government claim one is more democratic than the other. Only countries that cannot find their bearings would adopt a hypocritical system of governance blindly without looking deep into their own cultures to find the form of Government that blends with their own cultures.