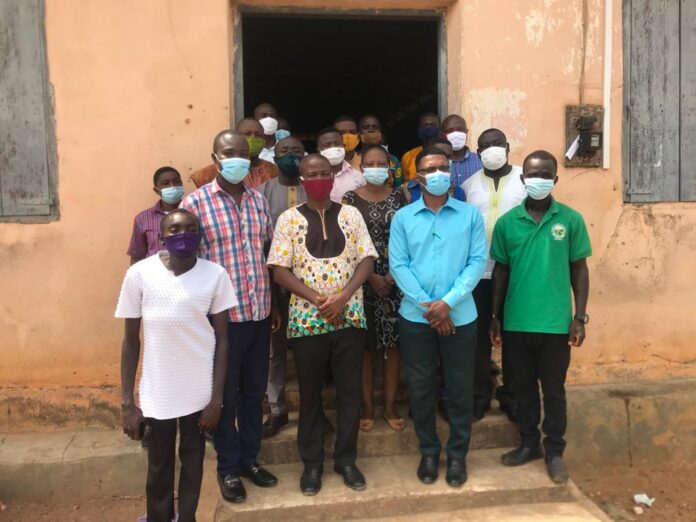 The Atiwa East Department of Agriculture conducted a performance review to access agricultural activities and extension delivery in 2020.

He indicated that the Director and an Extension Officer winning these prestigious awards suggest the overall performance of the district department of agriculture.

He applauded the efforts of the department towards the development of Agriculture in the district. Mr. Simon Asare advised stakeholders of Agriculture not to be content with where they are but to work hard to sustain high standards, improve on flaws and achieve new targets.

He noted that the performance review goes beyond just achieving targets but considers the results and impacts of activities.

He further assured that the Assembly was committed to supporting the vision of the department.

The District Director of Agriculture, Mr. Samuel Ofosu commended the efforts of the District Assembly towards the development of agriculture.

He noted the involvement of the General Assembly in helping to establish a satellite market, the procurement of Threshers, rice nets, and the provision of Cement for the Awosoase Oil Palm FBO.

Mr. Ofosu was also grateful to the District Assembly for their support towards the Government’s flagship programs.

ALSO READ  Uber Security; How safe are we?

He explained how the District Assembly under the leadership of the District Chief Executive, Hon. Kwabena Panin Nkansah assisted in raising 20,118 Oil palm seedlings in 2020 to be supplied free to farmers.

He presented on how Fall Army Worm has been managed such that no farm out of the 617.5 Ha affected farm area was completely destroyed in 2020.

He indicated that 2021 farmers benefited from the Planting for Food and Jobs program as compared to 970 in 2019.

559 farmers also took part in the Special Rice Initiative of which a total land area of 692 Ha was cultivated with the Agra Rice as compared to 250Ha in 2019. In all, the District was able to develop its own rice brand known as the Atiwa Rice.

Mr. Samuel Ofosu addressed problems the department was facing. He highlighted the contribution of the Canadian Government through the MAG program in providing resources for most of the agricultural activities.

He mentioned the partnership with CSIR in the establishment of on-farm demonstrations and was also full of praise for Hopeline Institute for their support in organizing a study tour for rice farmers and sponsoring the celebration of the Atiwa Rice Day.

He called on more investors to assist in the development of agriculture in the district.