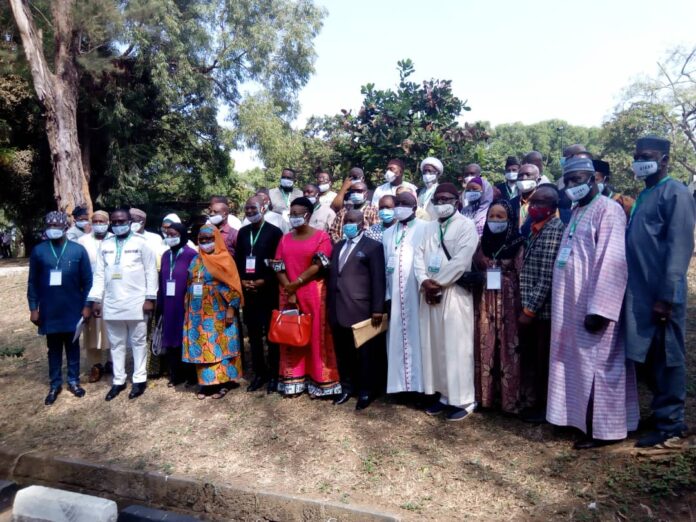 The event which took place at Radisson Blu Mammy Yoko Hotel, Aberdeen in Freetown, is the first time in the history of Sierra Leone such an event has taken place.

In his welcome address, Director General of GIABA, Judge Kimelabalou Aba said, they are expecting that the seminar will be a springboard for a renewed commitment of all religious leaders to identifying the key roles they must play in raising awareness and shaping the morals of their congregations and followers through the force of moral persuasive messages.

“We must be bold to speak the truth at all times, speak against evil, drive the good path, counsel the bad, and report obvious destructive evil to the appropriate authority, where necessary…If we must rid society of these wrongdoings, then, we must continue to stand as the shining light and examples which we are; we must resist all the negative influences and help in guiding the path of our followers in building a safe and secure society”, he noted.

The GIABA Director General urged everyone present to see the opportunity as a call to duty, by taking action points from the seminar and pledging to contribute their quota as religious and opinion leaders in building a better society for their country Sierra Leone.

Aba gave a brief introduction about GIABA and the work they do. He noted that GIABA is a specialized Institution of ECOWAS, as well as a FATF-style Regional Body (FSRB) for West Africa, adding that, it was established in the year 2000 by the ECOWAS Authority of Heads of States and Governments, with the mandate to protect the economies of member States from laundering the proceeds of crimes and to combat terrorist financing.

The Director, Financial Intelligence Unit Sierra Leone, Mr. David N. Borbor said the seminar is very timely and auspicious because the plague of insecurity ravaging the entire world is a cause for concern. Mr. Borbor added that his Institution is highly delighted to collaborate in the delivery of the seminar which is designed to assist the country’s faith-based groups/organizations to protect them from being misused by criminals to launder their illicit wealth and to finance terrorist activities.

The Deputy Minister of Finance 1, Dr. Patricia N. Laverley said, her government under the leadership of His Excellency Julius Maada Bio is committed to supporting every endeavor aimed at protecting the integrity, credibility, and viability of the Sierra Leone financial system.

Dr. Laverley also said since they assumed leadership of the country, the government has provided increased support to the FIU to ensure that the Unit is properly positioned to support law enforcement agencies as well as the private sector in the fight against ML/TF and associated predicate offenses.

Giving the keynote address, the Attorney General and Minister of Justice, Anthony Y. Brewah said “It is everyone’s responsibility to do something about protecting this country from the offense of money laundering and terrorist financing activities and to increase public awareness of what constitutes money laundering offense.”

ALSO READ  With impunity, Somali police detain, confiscate equipment and intimidate journalists at gunpoint in Mogadishu
AMA GHANA is not responsible for the reportage or opinions of contributors published on the website.