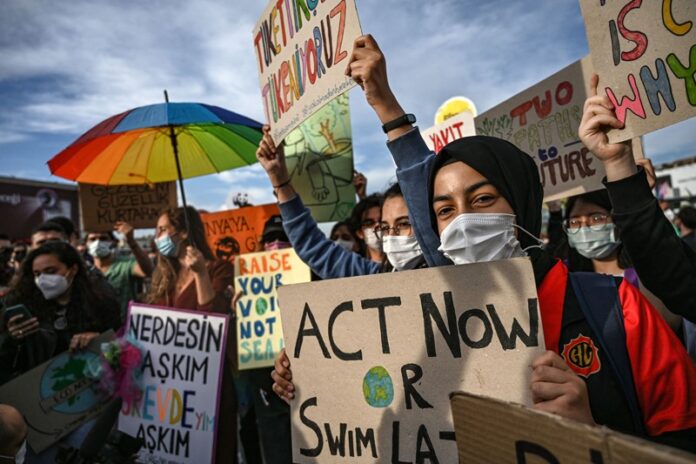 Young climate leaders came together in Glasgow today with negotiators, officials, and ministers from across the world, making their voices heard and demanding the action needed to prevent catastrophic climate change in our lifetimes.

Events across COP26 focused on harnessing the expertise of young people and putting their views directly to the negotiators and officials working to agree on global action on climate change.

The day was co-chaired by YOUNGO, the Official Children’s and Youth constituency of the UNFCCC which opened with a session called Unifying for Change: Global Youth Voice at COP26.

YOUNGO also presented the COY16 Global Youth Position statement, representing the views of over 40,000 young climate leaders from across the world.

The statement presented their priorities directly to Ministers, including action on climate finance, mobility, and transportation, through to wildlife protection conservation.

YOUNGO is the Youth Constituency of the UNFCCC. It consists of many youth-led organizations, groups, delegations, and individuals working in climate change-related fields.

YOUNGO runs various Working Groups focusing each on specific aspects of the climate change within the UNFCCC negotiations and events to ensure that perspectives of young and future generations are taken into account in the multilateral decision-making processes. Besides that, YOUNGO members observe and report on climate negotiations, and the implications of their outcomes.

History
In 2009, youth participation in UN Climate Change had reached the level at which an official constituency was formed for youth NGOs. The UNFCCC recognized youth as an official constituency called “YOUNGO” (Youth + NGO). After two years operating under provisional status, “YOUNGO” became fully recognized at COP17 in Durban, South Africa. YOUNGO has since served as both the official conduit for youth participation in the UN climate talks and as a global network of youth and youth-focused organizations working on climate change. more …

Participation in the UNFCCC processes
YOUNGO, as an official constituency to the UNFCCC, has the right to be represented at negotiations organised by the UNFCCC. It is also invited to represent youth at other UN events related to climate change.

Membership
Currently, YOUNGO has a member base of 200 youth-non-governmental organisations and 5500+ individuals. The members are connected via the official mailing list of YOUNGO, which also serves as a moderated communication channel for all standard communication within YOUNGO.

Apart from that, the YOUNGO Bottom Lining Team (BLT) and the Working Groups, have their own mailing list and communication channels as appropriate. YOUNGO’s work processes are conducted by use of various channels, including Slack, Loomio, and informal channels such as Facebook Group(s). Any entity and individual interested in the field of climate change can join YOUNGO and its formal and informal channels of communication.

Structure
The work and structure of YOUNGO is at its core guided by the principles of consensus-based decision making, flat hierarchies, as well as inclusion and equitable representation. As a consequence, none of the YOUNGO roles and institutions described below have any designated or de facto decision-making power and instead function as facilitating and supporting elements in the work of the wider YOUNGO constituency.

In particular, it is the task of the YOUNGO Focal Points and the YOUNGO Bottomlining Team to ensure fair and equitable representation of youth from the Global South and North, as well as an otherwise diverse participation of youth in its processes. Monitoring of adherence to diverse participation is done through a designated Culture Watcher in the Bottomlining Team. Strict ethical rules of conduct apply to any individual or organisation assuming any function within YOUNGO (i.e. BLT Member) or on behalf of YOUNGO (i.e. nominated speaker at COP sessions).

ALSO READ  Effiduase Bomeng declares support for NPP Youth Organizer hopeful, Prince Kamal
AMA GHANA is not responsible for the reportage or opinions of contributors published on the website.