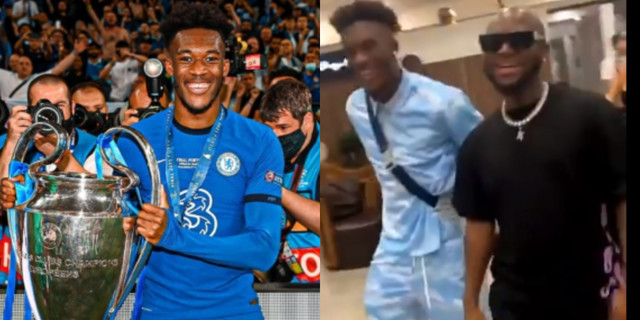 Chelsea attacker, Callum Hudson-Odoi, arrived in Ghana for holidays following the Champions League over Manchester City over the weekend in Portugal.

He was picked at the Kotoka International Airport [KIA] on Wednesday night and was met at the airport by Ghana highlife singer and friend, Gregory Bortey Newman popularly known as King Promise.

Hudson-Odoi was welcomed by an Adowa cultural group at the airport.

The 20-year-old could not hold back and joined the troupe to show off some dance moves as he made his way out of the arrival hall of the Kotoka International Airport.

Odoi was an unused substitute as Chelsea beat Manchester City 1-0 to win the UEFA Champions League on Saturday.

Hudson-Odoi’s was born in the United Kingdom to Ghanaian parents; his father, Bismark Odoi, is a former Hearts of Oak player.

In all competitions, Hudson-Odoi made 32 appearances for the London based club where he managed to score four goals with three assists in the just-ended season.

Hudson-Odoi has been a long-term target of the Ghana Football Association to consider a nationality switch despite capping three times for England at the senior level.

He’s still eligible to feature for the Black Stars of Ghana per the new FIFA eligibility rules for playing below age 21.

ALSO READ  FA Cup final preview: Liverpool V. Chelsea
AMA GHANA is not responsible for the reportage or opinions of contributors published on the website.