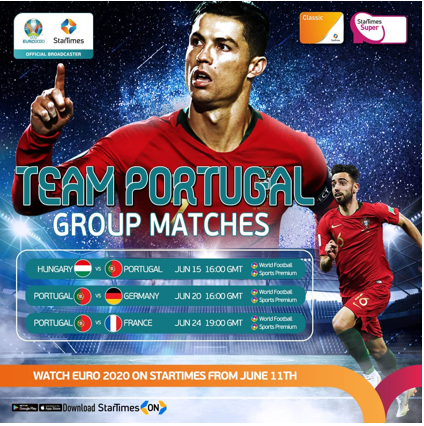 UEFA Euro 2020 is starting in less than ten days. All 51 matches of the tournament will be broadcast live and in HD on StarTimes. The 24 competing teams have been divided in six groups, with the Group F being labelled the “Group of Death” for containing three former Euro champions — Germany, France, Portugal — and two-time FIFA World Cup runner-up Hungary.

It is an unwritten rule for every football competition that there has to be a Group of Death and Euro 2021 is no different.

And when you have players like Toni Kroos, Thomas Müller, Cristiano Ronaldo, Bruno Fernandes, Antoine Griezmann and Kylian Mbappé playing against each other it is pretty clear that something special is on the cards.

So when trying to determine which is the Group of Death at this year’s Euros, one needs to look no further than Group F, where former Euro winners Germany, Portugal and France are joined by Hungary.

Between them, the three teams have won six titles and France and Portugal where the 2016 finalists. All three are amongst the favourites to go far in the June 11 – July 11 competition, that will be played in 11 cities across 11 countries.

Despite having slipped down the world rankings, Germany remain very much a team that peaks when it comes to competition time. Die Mannschaft also have the advantage of playing all their three matches at home in Munich’s Allianz Arena, with at least 14,500 fans allowed.

Coach Joachim Löw embarked on an ambitious plan to rejuvenate the team after the 2018 World Cup, but has since back-tracked a bit and recalled Müller (31 years) and Matts Hummels (32 years) to give the side more experience.

Löw can also call on Ilkay Gündogan, who was one of Manchester City’s stand-out players this season, as well as Champions League heroes Kai Havertz, Antonio Rüdiger and Timo Werner.

French coach Didier Deschamps, meanwhile, has an embarrassment of riches up front, with Olivier Giroud, Ousmane Dembélé and Karim Benzema amongst the forwards vying for a place in the starting line-up with Griezmann and Mbappé.

Benzema has returned to the squad after last playing for France in 2015. The Real Madrid striker had praising words for Mbappé, with whom he has never played together. “He is still a young player, a phenomenon. He has a lot of speed and has skill in front of a goal. He’s a very, very good player.”

But while Mbappé is a player for the future, 36-year-old Ronaldo is most likely playing in his last Euros for Portugal – if not the last international tournament.

The five-time World Footballer of the Year has a host of talented players alongside him, like Manchester United star Fernandes, 21-year-old João Félix or Rúben Dias, who was voted as Manchester City’s player of the year.

But most of the attention will be on Ronaldo, who would love nothing more than to end his career with another Euro title. The reigning champions are definitely in the mix for a repeat success. But to manage that, they first need to escape the Group of Death.

No true football fan will want to miss any of the exciting Group F matches. And Ghanaian football fans need to do no more than to switch to the StarTimes football channels, as the continent’s leading digital-TV operator StarTimes will showing all the matches live and in HD.

ALSO READ  Michael ‘One Bullet’ Ansah to feature on De-luxy Professional Boxing League Fight Night 7
AMA GHANA is not responsible for the reportage or opinions of contributors published on the website.