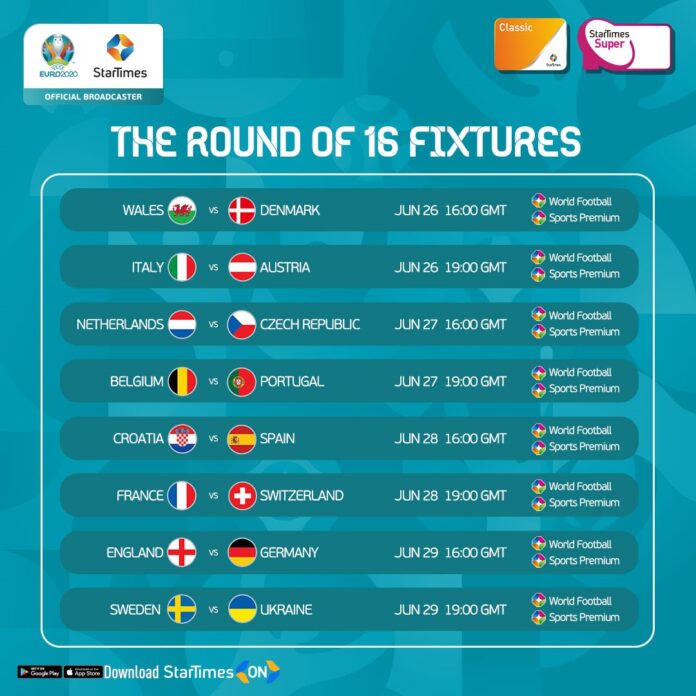 The Euro 2020 has reached the round of 16 that begins on Saturday. The group stage has been exceptional and the knock-out phase will be that much better with clashes such as England v Germany and Belgium v Portugal, all aired on StarTimes, Euro 2020 official broadcaster.

If any international game comes close to rivalling the best club derbies in the world, it must be England v Germany.

Since 1966 the two countries have been involved in a fierce rivalry. In that year England won their first – and to date – only major international trophy, when they beat Germany 4-2 in the World Cup final in Wembley.

It was the beginning of a wonderful rivalry that will see another highlight on Tuesday as Die Mannschaft travel to Wembley to take on the Three Lions in a round of the last-16 match at Euro 2020.

Germany spluttered and coughed their way into the knock-out stage, twice having to come from behind at home against Hungary to record the 2-2 draw they needed.

England, on the other hand, had their fright in their second match against Scotland, when they were held to a goalless draw. The side has yet to concede a goal, having beaten Croatia and the Czech Republic 1-0 in their two other matches.

Midfielder Jordan Henderson, who was given a first outing against the Czech Republic after recovering from injury, said that Germany’s struggles to advance meant very little.

“They are still a very good side and have excellent players all over the field. It will be a hard test and in the knock-out stage, it does not matter who played better previously, only the form on the day counts.”

Germany coach Joachim Löw promised fans a different Germany against England. “It will be a much more open game. Hungary played very defensively, we prefer playing teams that attack and England will have to attack at home.”

The game between the bitter rivals is not the only mouth-watering clash in the round of the last 16, with Sunday’s game between Belgium and Portugal in Seville rivalling the Wembley game in terms of expectations and fan appeal.

On the one hand, you have the best country in the world, Belgium, and on the other, you have Cristiano Ronaldo, who seems to be using the Euros to make himself even more immortal.

His two goals against France saw him equalling Iranian Ali Daie’s international record of 109 goals. His 14 Euro goals overall, is more than anybody else has scored. He also has the highest number of Euro victories (12). He is the first player to appear in five Euros and scored in each one of them.

But whether the genius of Ronaldo will be enough to overcome the team effort of Belgium – who together with Italy and the Netherlands are the only teams to have won all three matches at the Euros -remains to be seen.

Belgian coach Roberto Martínez, has a whole host of star players in his side, like Eden Hazard, Kevin De Bruyne and Romelu Lukaku, has managed to mould them into a winning team.

“This generation deserves some silverware and they are capable of winning it,” Martínez said.

All Euro 2020 games are being shown live and in HD on the StarTimes channels.