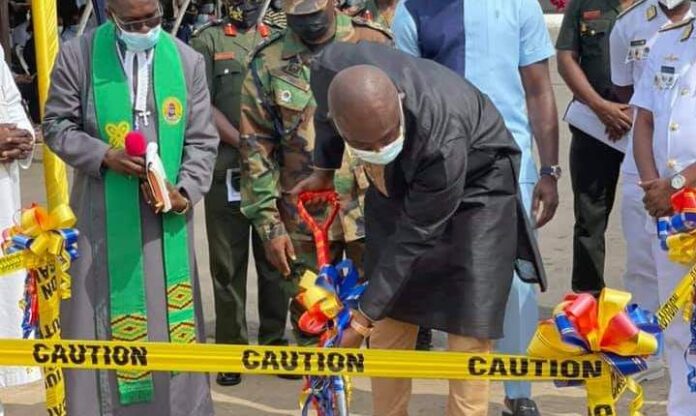 The Assin Central MP Hon. Kennedy Ohene Agyapong held a sod-turning ceremony at 09:00hrs today for an 80 bed Cardiothoracic Centre at the 37 Military Hospital in Accra.

The Centre will include facilities such as a Cardiothoracic Training Centre and Conference room, VVIP clinic, 3 operating theaters, an Intensive Care Unit, Executive Clinic, a Dialysis Unit, X-Ray unit, a Robotic Unit, a pharmacy, and an outpatient department among other essential units.

As it were, the 80-year-old premier military hospital refers its Cardiothoracic and heart-related cases to the Korle Bu Teaching Hospital in Accra for treatment.

The sod-turning ceremony is a follow-up on a promise made by Hon Kennedy Agyapong in 2020 when he presented some personal protective materials to the 37 Military Hospital in response to the outbreak of the dreaded Covid-19 virus in Ghana.

Chief of Defence Staff Mr. Seth Amoama in his opening remarks said the kind gesture by the honourable member was another stride in their hospital management and adds that it is a project of great significance to healthcare.

Additionally, in many ways, this project will be the first in the country which will offer treatment of cardiovascular diseases in the country.

He paid glowing tribute to the Assin Central MP for his contribution to health care delivery in Ghana and expressed the gratitude of the military.

Kennedy Agyapong MP, who is also the Chairman of the Defence and Interior Committee in Parliament expressed his contentment over the attention the project has received so far.

He chose the 37 Military hospital due to the hospital’s effort to deliver quality health care and for their services to the nation, also it’s only fair for the medical staff to have pieces of equipment needed to deliver the best of services comparable to anywhere in the world. He then thanked staff and workers for contributing immensely towards the fight against Covid 19 pandemic.

He explained that the Centre when completed will have all the needed units to deliver on its promises and appealed to the contractor to live up to expectation and deliver on time. Again, he expressed gratitude to the Ghana Armed forces for their support and service to the nation.

He concluded by saying this was just the beginning of greater things to come.