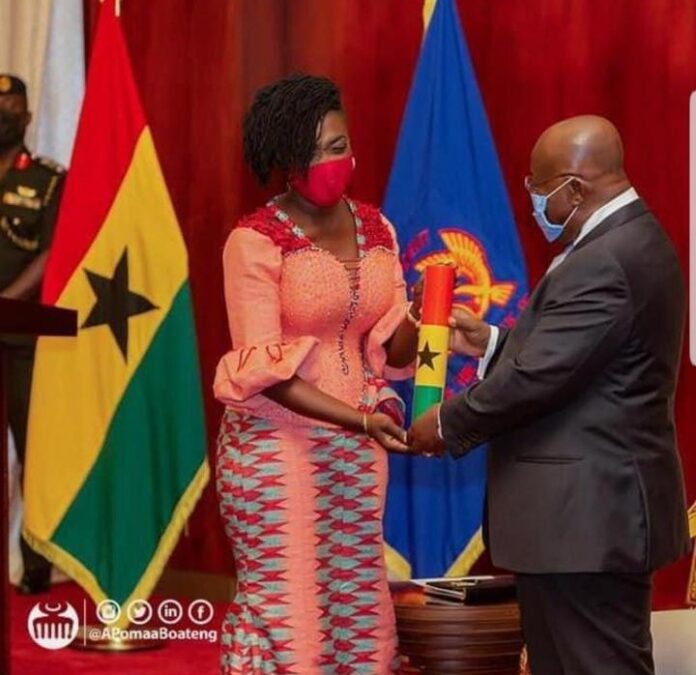 The people of Juaben in the Ashanti region have expressed their heartfelt appreciation to the President, Nana Akufo Addo for acknowledging the hard work of their MP, Hon. Ama Pomaa Boateng.

In a statement signed and issued by some polling station and constituency executives including Alhaji Babs, the constituency Organiser, the people applauded the president for the trust he has bestowed on their MP.

Promising to continue the support they have given her since she became MP, the people also assured the president of her outmost delivery to spur on the successes of the NPP government in her capacity as Deputy Minister for Communication and Digitalisation.

The Juaben MP who entered parliament in 2012 representing the then newly created Juaben constituency has showed much growth and competence in parliamentary responsibilities and increased ability to undertake national assignments, the reason many believe in her capability to deliver at the Communication and Digitalisation Ministry.

She represented Ghana at the ECOWAS Parliament while she also had the opportunity to serve on some Boards and committees in parliament.

Her constituents say they take pride in the fact that she ably delivered as Juaben MP and ECOWAS Parliament Member and could still raise their constituency to an enviable pedestal in the region.

“Amidst all the workload, she has consistently been in touch with her constituents, making the party stronger and more attractive in the constituency”. The statement said.

ALSO READ  Disability Federation petitions gov't over delay in Disability Act Amendment
AMA GHANA is not responsible for the reportage or opinions of contributors published on the website.