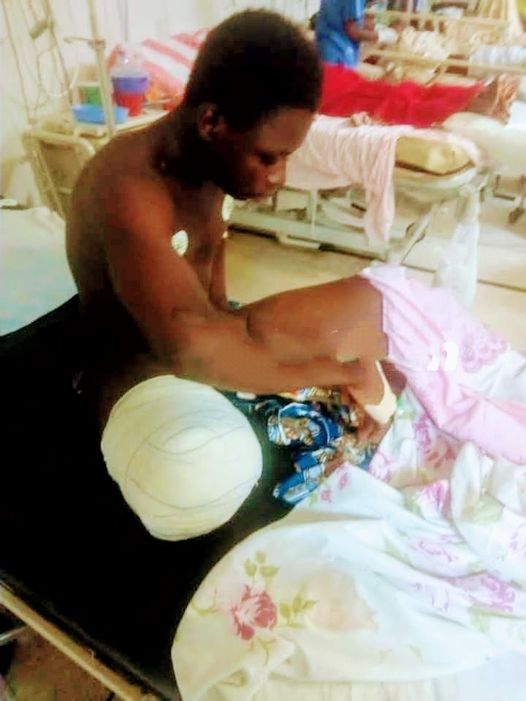 A 16-year old boy who was shot during Tuesday’s [June 29, 2021] disturbances at Ejura in the Ashanti Region, has had his right leg amputated by doctors at the Komfo Anokye Teaching Hospital.

He’s among four persons who sustained gunshot wounds after two persons also died when some soldiers opened fire on protesters in Ejura.

The victim, Awal Misbawu, was initially referred to the St. John of God Hospital at Duayaw-Nkwanta, and later sent to the Komfo Anokye Teaching Hospital where the leg was amputated on Saturday.

The mother of the victim, Salamatu Mohammed said her son is in pain.

“So the child was crying so painfully and we had to call on our chief who in turn also called a doctor for us and the child was admitted. So he [Doctor] informed us that the leg cannot be worked on so he has to be amputated. So that has been done and my son is in pain right now.”

Another victim, Louis Ayikpe, who sustained an injury in his right upper part of the waist, is also undergoing treatment at the Komfo Anokye Teaching Hospital.

His aunty, Rita Sefa Amponsah, spoke to Citi News about the victim’s condition.

“He was taken to the theatre two days ago, and they said the gunshot has destroyed the leg so it has to be amputated. So he did the surgery and that has been done which is so terrible for us. The most painful part is that he wasn’t at the protest. He was standing somewhere and the gunshot hit him.”

Meanwhile, the Member of Parliament for Ejura/Sekyedumase, Bawah Mohammed Braimah, wants government to cater to the medical bills of the victims and compensate them.

“I am very sad and disappointed in the Regional Security Council especially the Regional Minister because this incident happened last week Tuesday and it was reported that six people have been shot and two have died. Per the narration of the minister, he said he deployed the soldiers and the fallout was that four are injured and two have died, you only focused on the dead and left those who got injured.”