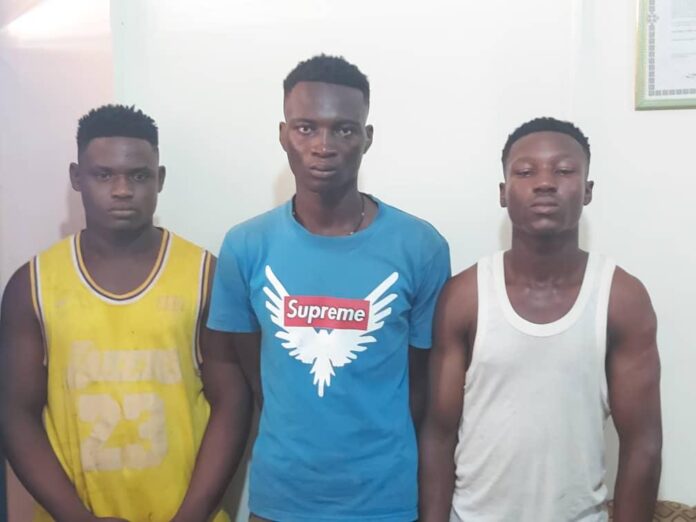 The Upper East Regional Police Command today Sunday, July 11, 2021, caused the arrest of three (3)suspected armed robbers alleged to be involved in various robbery incidents in and around the Nabdam and Zebilla Districts of the Upper East Region.

The suspects include 19-year old, Maxwell Ziaba a. k. a strongman, Bodozina Awudu a.ka. ‘Network Absorber’ aged 20 and Yidaana Shamshudeen, aged 23. They were smoked from their various hideouts at Pelungu and Dakota with exhibits such as one(1) locally manufactured pistol, three(3) cartridges of ammunitions, one(1) double-edged knife, two unregistered Motobikes, five(5) gold detectors and five(5) mobile phones.

The three who are currently in police custody upon interrogation admitted committing various criminal activities. They admitted robbing some Mossi men at Tarkwa and Obuasi mining communities near Tongo and Gbane in the Talensi District of the Upper East Region.

Some individuals that have fallen prey to such robbery operations reported at the Regional CID Office on hearing of the suspect’s arrest to identify them. One identified two of the gold detectors stolen by the robbers as his property taken from him during one rainy day some weeks ago.

Intelligence by the Regional Police Command indicates that most robbers use hotels and other hospitality setups as their hideout. The police is therefore urging hotel operators and players in the hospitality industry in the region to support the police in the fight against crime and other illegal activities.

ALSO READ  Police capo killed as Robbers attack Bullion Van in James Town
AMA GHANA is not responsible for the reportage or opinions of contributors published on the website.