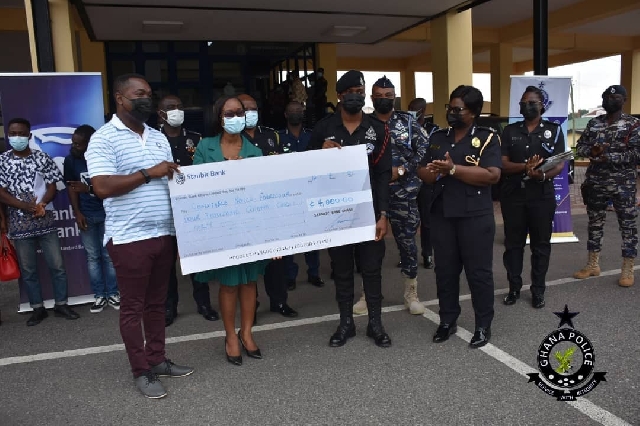 For returning an amount of GHS2,000 he found even though nobody was in sight to confront him should he have kept it for himself, Constable Prince Fordjour of the National SWAT unit has been rewarded with almost six times the dispensed amount he chanced upon at the ATM of Abeka Total branch of Stanbic Bank.

Constable Fordjour handed over the money to his commander, Chief Superintendent Theodore Hlormenu, who, in turn, gave it back to the bank.

The bank and the police service jointly honoured and rewarded the young police officer at a ceremony at the police headquarters in Accra on Friday, 16 July 2021.

While the Inspector-General of Police, Mr. James Oppong-Boanuh, gave Constable Fordjour a GHS5,000 cash reward, the bank gifted him a special investment fund of GHS4,000, a gift voucher of GHS 1,000, a current account credit of GHS1,000 and some corporate souvenirs of honour.

At the short honorary ceremony, Chief Superintendent Hlormenu said the reward is “not about the amount involved but the gesture of the constable, which personifies what the police represent in the community – which is the same as our motto – Service with Integrity’”.

ALSO READ  Happy FM holds maiden edition of Development Dialogues with engagement with Education Ministry
AMA GHANA is not responsible for the reportage or opinions of contributors published on the website.