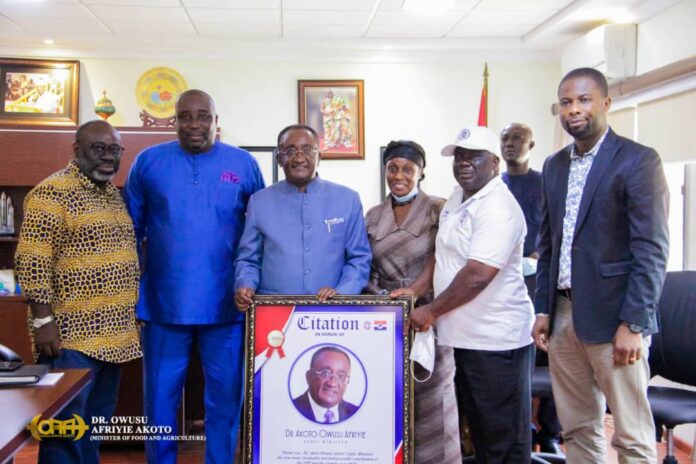 As part of the visit, the National Executive of the welfare association of the Constituency officers led by the Secretary of the Association, Jeffrey Edward Osei, who doubles as the NPP Constituency Chairman of Ayawaso West Wuogon, presented a citation to the distinguished patriot of the New Patriotic Party (NPP) and Ghana, Dr. Owusu Afriyie Akoto, a man christened the “Legend” due to his peerless contributions to Ghana and Africa in the sector of Agriculture especially at the very vicious and grievous periods of the COVID-19 pandemic.

Presenting the citation to the Minister, the Secretary of NCOW noted that, prior to the Workshop which saw the inauguration of a welfare scheme for the constituency officers, Dr. Owusu Afriyie Akoto was notified by the Association. As typical of the Minister regarding his commitment, dedication and passion for the Tradition of the Party, he came to the aid of the Association.

Jeffrey Edward Osei continued that, due to Dr. Owusu Afriyie Akoto’s selfless contributions towards the success of the workshop, the Leadership of the Welfare Scheme in addition to the entire NPP constituency officers are full of gratitude, and as a result, would like to express their appreciation and also seek for God’s blessings and favour for him in all his endeavors. It is also the Association’s fervent prayer that the purpose, visions and goals of the Minister for the Party and Nation realises fruition.

ALSO READ  Dr. Bawumia has the competence to lead the NPP—MP for Tolon Constituency

Reading from the citation, it quotes; “Thank you, Dr. Owusu Afriyie Akoto for your many invaluable and indispensable contributions to the NPP and the Country as a whole. Your unquestioned loyalty, dedication, and enormous contribution toward the establishment of the NPP Constituencies Officers Welfare deserve praise and commendation. We applaud and honor you for your stupendous contribution in the creation of this welfare scheme and other human-centered activities. Continue soaring higher in your endeavors”.

Dr. Owusu Afriyie Akoto commended the Association for their show of gratitude and pledged to continue supporting them in all their activities for continued strengthening and sustenance of the base and tradition of the Party.

The successful workshop, which birthed the inauguration of the NPP Constituency Officers Welfare, was held at the Capital View Hotel, Koforidua, Eastern region between 16th and 18th July 2021.

The Workshop was held at the behest of the NPP Constituency Chairmen across the 275 constituencies of the Country.

The primary objective of the workshop was to institute a Welfare Scheme for NPP Constituency Executives. The earlier proposed name for the Scheme was the National Constituency Chairmen Welfare Fund (NCCWF) but was later changed to NPP Constituency Officers Welfare upon further and broader consultations.

The welfare association comprises all the constituency officers of the NPP, seventeen (17) per constituency, making up a total membership of four thousand six hundred and seventy-five (4,675).

The aim of the welfare scheme is to serve as a special purpose vehicle in mobilizing resources to improve the welfare of constituency executives and through that address pertinent challenges of the base of the Party.

The Minister was in the company of Mr. Frank Amoako, a Political Assistant, when he was presented with the citation.

Black Stars to face Brazil on September 23 in a pre-World...