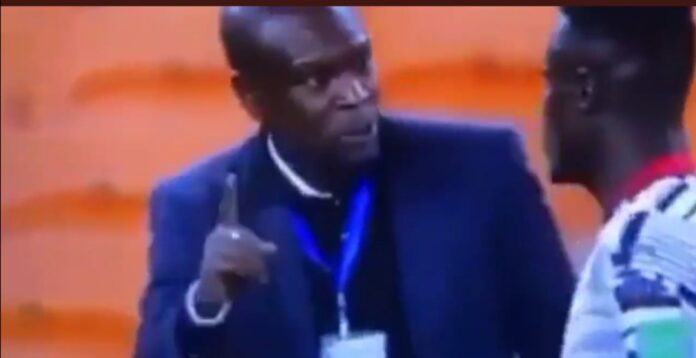 The Black Stars suffered a painful 1-0 defeat to the Bafana Bafana on Monday in the second Group G game at the FNB Stadium in Johannesburg.

A late second-half strike from forward Bongokuhle Hlongwane’s was enough to earn all three points for the hosts.

While Akonnor has come under intense pressure over the team’s poor performances, his man-management has also now come under the spotlight.

On the 60th minute, Kwame Poku, a former Asante Kotoko striker was introduced to the game.

However, a video that has gone viral on Twitter shows the 47-year-old seemingly threatening Kwame Poku during the game.

The 15-second clip, posted by Twitter user Evans Gyamera-Antwi, shows Akonnor call over Opoku, who had come on in the 60th minute, and apparently, give him a stern talking to.

The lip-reading from the 16-second video captures Akonnor swearing to the striker in Twi: “I swear, [you have to] score or else…”

Calls for CK Akonnor’s dismissal have intensified after the recent international break in which the Black Stars picked up three points and scored one goal in matches at home against Ethiopia and away in South Africa.

His selections and in-game management have also been called into question with doubts already expressed over whether he is the right man to lead the Black Stars for the rest of the World Cup Qualifiers and at next year’s AFCON.

Meanwhile, some former Ghana internationals have leapt to the defense of Akonnor despite the Black Stars’ faltering results.

ALSO READ  2022 WCQ: Milovan Rajevac names maiden Black Stars squad for Zimbabwe doubleheader
AMA GHANA is not responsible for the reportage or opinions of contributors published on the website.