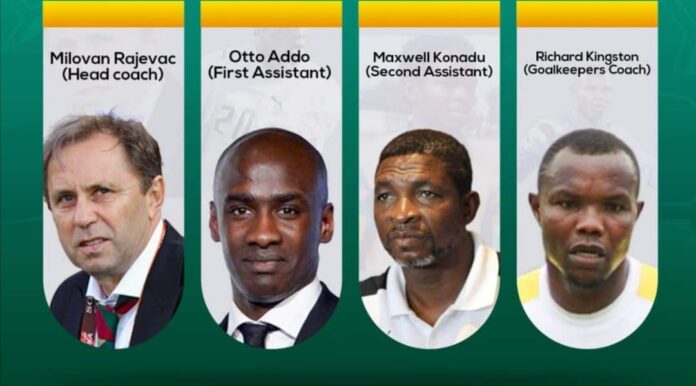 A new technical team for the senior national team, the Black Stars has been announced by the Ghana Football Association[GFA].

The new team is headed by Serbian coach, Milovan Rajevac and will be assisted by Maxwell Konadu and Otto Addo.

Former Black Stars goalkeeper, Richard Kingston has been retained as the goalkeepers’ trainer.

Milovan signed a one-year renewable contract with a monthly salary of $30,000. His contract will be extended should he guide the Black Stars to book a place for the 2022 Fifa World Cup in Qatar.

He will be awarded a sum of $600,000 should guide the Black Stars to win the 2021 Africa Cup of Nations in Cameroon and qualify the country for the 2022 Fifa World Cup in Qatar.

Meanwhile, Konadu, who is the head coach of Legon Cities and Otto Addo, who is the assistant coach of Borussia Dortmund will be work based on assignment with the national team.

The Black Stars after winning against Ethiopia and losing to South Africa sit 3rd with three points in Group G after two matches played.

Rajevac and his technical team’s immediate assignment is next month’s doubleheader against Zimbabwe.

Ghana will take on the Warriors in Cape Coast on Saturday, October 9, before departing for the return leg in Harare three days later.

ALSO READ  Care for the Elderly in Ghana’s Changing Age Demographic
AMA GHANA is not responsible for the reportage or opinions of contributors published on the website.