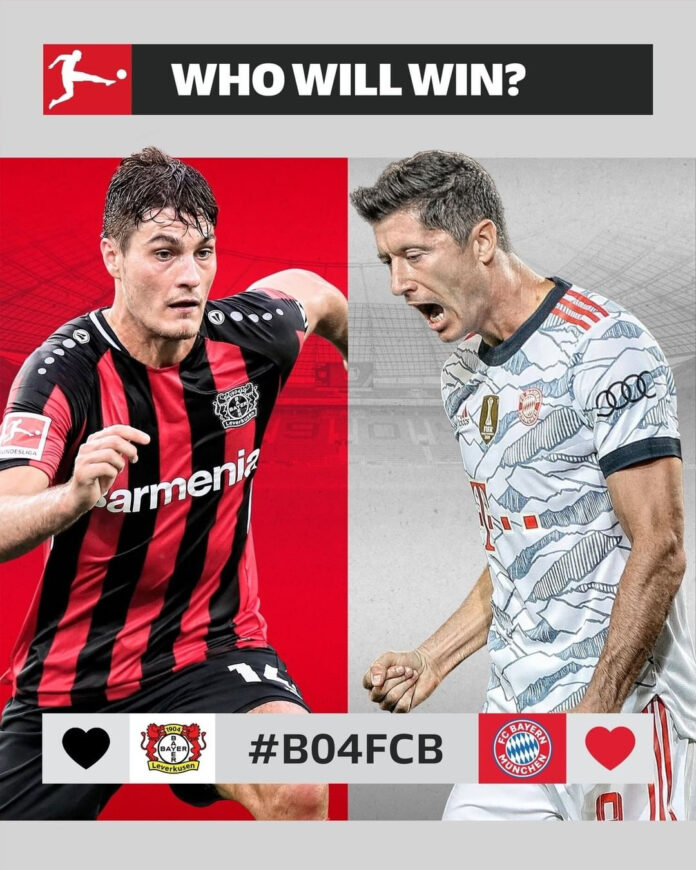 Bayern Munich is feeling the heat and on Sunday they are travelling to one of the clubs producing the flames: Bayer Leverkusen.

What the perennial champions from the Bavarian capital know well is winning, what they don’t know so well is being chased and it seems that they could be chased this season by Leverkusen and Dortmund.

Bayern top the table on goal difference from Leverkusen, with Dortmund a point behind.

And the difference in their fortunes in their last Bundesliga match for both teams involved in Sunday’s top of the table clash could not be more different.

Bayern lost 2-1 at home to Eintracht Frankfurt, their first defeat in the Allianz Arena since they were beat by the same score in November 2019 – ironically by Leverkusen.

Leverkusen, on the other hand, secured an emphatic 4-0 victory at Arminia Bielefeld to handily secure the bragging rights ahead of Sunday’s match.

Unlike Bayern, Leverkusen are a side without many big-name players, with coach Gerardo Seoane, instead focusing on building a cohesive unit.

Midfielder Kerem Demirbay, who is one of the team leaders in the side, said that the feeling of togetherness stands out. “The mentality and team spirit are important. We are all together, from number one to number 20.”

He however dismissed speculation that Leverkusen is already on par with Bayern. “There is still a long road ahead,” he said.

Another thing that Seoane has changed is that he regularly goes into games with young players. Defenders Odilon Kossounou (20), Jeremie Frimpong (20), Mitchel Bakker (19) – who might miss the game through injury -, attacking midfielder Florian Wirtz (18), as well as wingers Paulinho (21), Amine Adli (21) and Moussa Diaby (22), have all seen regular action this season.

Kossounou, in particular, has been one of the stand-out players and will go into Sunday’s match on the back of a 3-0 victory in Malawi with his Côte d’Ivoire national team in a World Cup qualifier.

The 32-year old makes regular appearances from the bench for Bayern but is unlikely to start the game in Leverkusen.

Another player involved in African internationals was right back Bouna Sarr who played in Senegal’s 4-1 win against Namibia. But with so many star players in the Bayern team, Sarr has not seen much game-time at club level.

Bayern’s regular right-back, Benjamin Pavard will miss the game in Leverkusen through suspension, but against Frankfurt coach Julian Nagelsmann moved to centre back Niklas Süle to the right and kept Sarr on the bench.

The list of Bayern players reads like a “who’s who” of international football, with Robert Lewandowski, Manuel Neuer, Thomas Müller, Leroy Sane, Serge Gnabry, Dayot Upamecano and Alphonse Davies just a few of the names on that list.

The game in Leverkusen is bound to attract attention from all over the world and African football fans can watch it live and exclusively on the StarTimes channels as Africa’s leading digital-TV operator will be showing all the best action from the Bundesliga throughout the season.