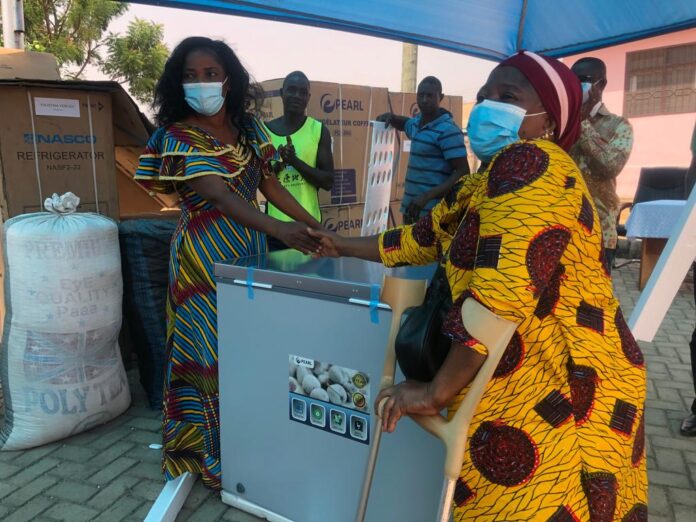 The Obuasi East District Assembly through the Department of Social Welfare and Community Development has presented items and disbursed money to Persons with Disabilities (PWDs) in the district.

The items which included Gas ovens, Gas Cylinder, cosmetics, provisions, deep freezers, sewing machines, and many more, were procured with the three percent allocation of the Assembly’s common fund for PWDs to enhance livelihoods.

All the items were procured based on request after which a needs assessment was conducted by the Department.

All 24 beneficiaries benefited from GHC44, 770.00 which was subjected to a vetting process.

Two (2) people received cash to foot their medical bills whiles one person was given educational support.

Mr. Godwin Bansah Director, Department of Social Welfare Unit, said the gesture was part of measures put in place by the Assembly and Government to prevent Persons with Disabilities from begging on the streets.

The intervention, he stated, was meant to make PWDs self-sufficient and to empower them to contribute meaningfully to societal and national development.

Hon Faustina Amissah, District Chief Executive, called on the beneficiaries to properly utilise the items to ensure the objectives of disbursement are fully achieved.

He said the government, through the Assembly, was committed to empowering Ghanaians irrespective of their circumstances in life and would continue to initiate pro-poor policies to reach out to all.

The DCE assured that the Assembly would continue to adopt intensive monitoring exercises to ensure that the items and the cash received were used judiciously.

Kwaku Ankrah, the Leader of the group in the District lauded the Government and the Assembly for the donation.

He pledged their commitment to putting the items and cash to good use to serve the intended purpose.