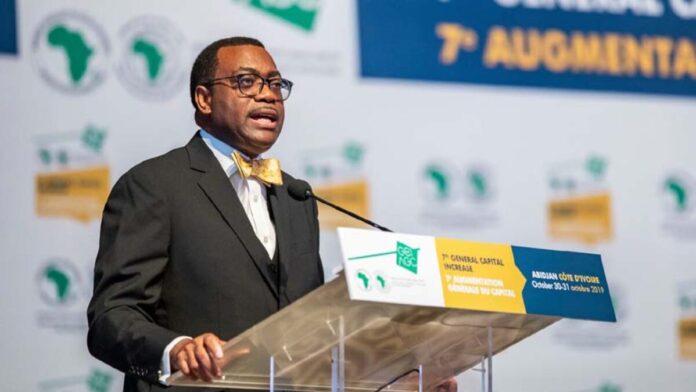 A spokesperson for the Silverbird Group said the award recognized Dr. Adesina’s commitment to promoting food security in Africa through agricultural innovation under the African Development Bank Group’s High5 priorities.

Adesina, accompanied by his wife Grace, received his award on Sunday in Lagos at the 2021 Silverbird Man of the Year Awards. The 14 award recipients this year included Lagos State Governor Babajide Olusola Sanwo-Olu, who was named ‘Man of the Year.’

The event was marked by celebration, music, and inspirational stories of humble beginnings shared by Adesina and Governor Sanwo-Olu.

Adesina narrated stories of his youth, as a schoolboy in Nigeria who had to walk long distances to draw water for the household, through to his university days in the United States during his Masters and PhD programs. He said that during those days, he sometimes did not have enough money for food and to commute to lectures.

Adesina, a former Nigerian agriculture minister, also delivered a keynote speech extolling Nigeria’s potentials, particularly its youth potential. He said Nigeria’s youth must be supported to propel the future of their country and the rest of Africa.

Adesina said the African Development Bank Group was working with its member countries, including Nigeria, to develop youth entrepreneurship investment banks to finance youth-led businesses across the continent. Last December, the Bank provided Nigeria with $170 million to help develop its digital technology and creative industry.

In his acceptance speech, Lagos State Governor Sanwo-Olu, whose award was voted for by the public, said he felt honored and humbled for the recognition. He renewed his pledge to continue to serve and unite the people for development.

“Tonight’s award has been a great awakening for me. Tonight’s award is an expression of what it means to really serve the people,” he said. “I stand here as the 15th Governor of the State, and I’ve sworn that for every breath that we have, we’d stop at nothing to ensure that all of the promises that we’ve given Lagosians, we’d keep them.”

The Governor praised Silverbird founder Ben Murray-Bruce for being the pioneer in bringing world entertainment to Nigeria and promoting Nollywood and tourism when nobody thought it was possible. He also paid tribute to numerous indigenous Nigerian industrialists and businessmen for being a “shining star” in nation-building.

Murray-Bruce said the award was established to celebrate Nigerians who positively impacted the lives of others in their careers and public offices.

“We have a lot of good people who are doing great things, and we must encourage them by promoting and honoring their good works for the younger generation to emulate,” he said.

Some of the past winners of the Man of the Year award were business magnate Aliko Dangote, Globacom founder Michael Adenuga and the current Director-General of the World Trade Organization, Ngozi Okonjo-Iweala.