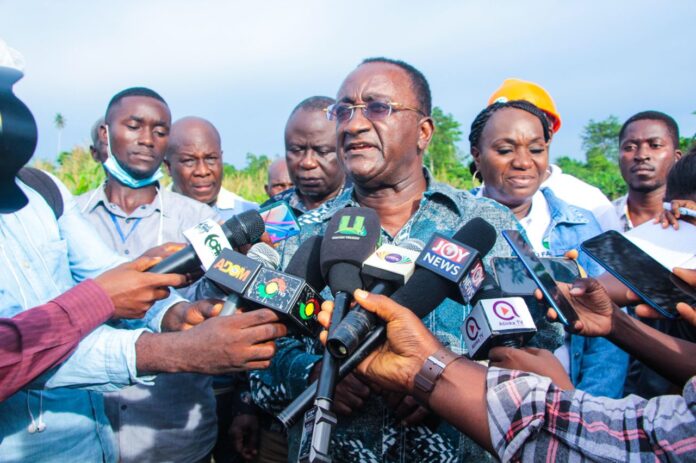 The Akufo-Addo government’s support for farmers in the country is unmatched since the inception of the Fourth Republican Constitution, the Minister of Food and Agriculture has underscored.

According to Dr. Afriyie Owusu Akoto, this was evident in the many agricultural-friendly policies including the Planting for Food and Jobs (PFJ) and fertiliser subsidy introduced by the Akufo-Addo administration to assist farmers to boost production.

The Minister made the statement while addressing farmers at Kwame Doudoo in the Eastern Region while embarking on a working tour.
“The government was doing everything possible to make farmers feel comfortable,” he said.

He also seized the chance to deny flatly the statement in certain quarters that there was a food shortage in the country.

“There is no food shortage in the country following my visit to 5 regions. Rather prices of food have gone up and with even poultry feeds for farmers high in the market,” he clarified.

He reiterated that his Ministry was not a financial institution but a principal that guides farmers to ensure that they produce enough to feed the nation.

He was full of praise for Mohammed Ibrahim, a farmer at Kwame Doudoo who owns the largest palm farm in the region which also includes fish pond and a maize farm.

Earlier, the Minister visited Legacy Square, a company that produces chemicals for seedlings to grow well.

Welcoming the Minister, the Chief Executive Officer (CEO) of Legacy Square, Mr. Amos Azinu, said his outfit has been in operation for about 7 years.

He indicated that hunger was deadlier than a pandemic, thus calling on farmers to collaborate with the MoFA to ensure a better Ghana.

Other places Dr. Akoto and his team visited were Pinora, a suburb of Asamankesse, where farmers here produce all kinds of juices, and Sahmen Farms, also in Asamankesse.

He rounded up his tour in the region with a visit to Kodua close to Asamankesse.