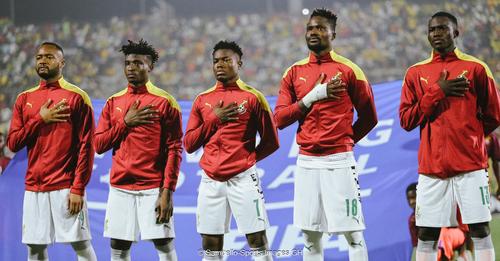 The Black Stars of Ghana beat Switzerland 2-0 in an international friendly on Thursday, 17 November 2022 at Abu Dhabi’s Zayed Sports Stadium to boost the team’s confidence ahead of the Fifa World Cup.

Mohammed Salisu and Antoine Semenyo scored their debut goals for the Black Stars in the second half after a goalless first 45 minutes.

Salisu rose high to head home the opener from a Kofi-Kyereh corner after the Swiss defenders failed to clear.

Bristol City striker Antoine Semenyo scored his first goal and Ghana’s second after shooting home from close range with a pass from Kamaldeen Sulemana who made an impressive run on the left wing.

The Black Stars will open their World Cup campaign on November 24 against Portugal in Group H.

ALSO READ  2022 World Cup: Kim Jung-nam reflects on South Korea’s return to the World Cup in 1986
AMA GHANA is not responsible for the reportage or opinions of contributors published on the website.