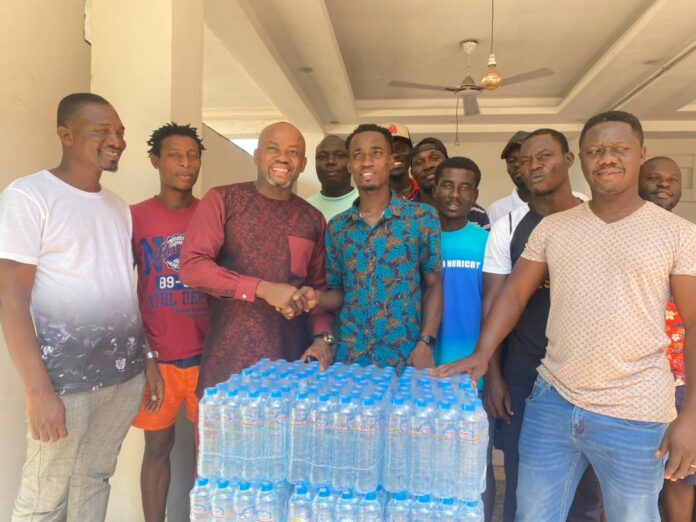 Mr. Sammy Anim Addo CEO of Baby Jet Promotions, Asamoah Gyan Foundation, and Manager of John Laryea on Friday presented cartoons of Paradise Pac Water to his ward as he prepares to face Michael Tagoe in a 10 rounds bout at Dezone Resort.

According to Anim Addo who is also an executive member of the Ghana Football Association, the gesture is to inspire and motivate John Laryea to give off his best to win and prepare for the future.

He expressed that there are plans for Laryea to move to the world ranks to face the best of the best in his Featherweight division.

“This is to refresh him after training and the fight, but we have a bigger agenda for him, as we know he is talented and ready to hit the world stage,” he said.

John Laryea thanked the management of Paradise Pac and promised to deliver and move on.

He praised Sammy Anim Addo for his wonderful support over the years.

Laryea who holds the WBO Africa Featherweight title is hopeful of winning so that he can be ranked among the top 15 in the WBO ranks.

There are other mouth-watering bouts on the bill.

ALSO READ  Black Stars storm Qatar in traditional flamboyant Fugu
AMA GHANA is not responsible for the reportage or opinions of contributors published on the website.