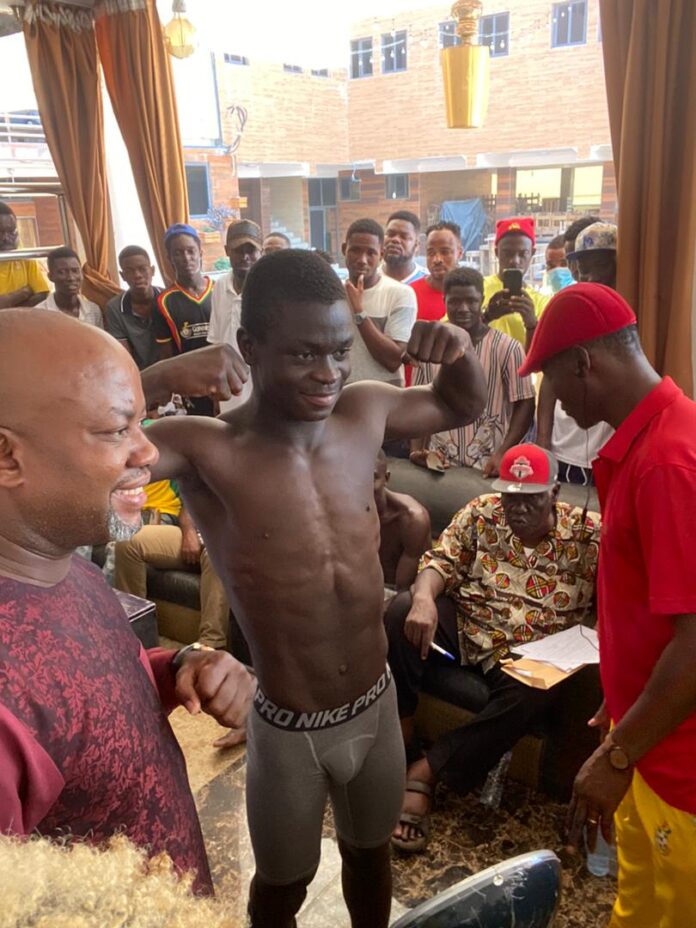 Boxing fans in and around Korle Gonno, Mamprobi, Chorkor, and Jamestown will have much to cheer when they pay only 20ghc to watch exciting bouts at Dezone Beach Resort on Saturday, November 19th.

The bill is put up by Bronx Promotions in collaboration with Swavy Blu Promotions and will feature crack and amazing boxers.

The main bout is a Featherweight ten rounder between John Laryea, the expensive boxer, and Michael Tagoe who has given a good account of himself this year.

Crowd favorite, Daniel Gorsh will also be in the ring to face veteran George Krampah for the National Super Bantamweight Championship.

There are other interesting bouts on the bill, such as Richard Fenny versus Joseph Adu, Nathaniel Sosu against Sylvanus Sosu, David Okine versus Issah Inusah, and Issah Awal against Amadu Seidu.

Isaac Dowuona will come up against Yussif Seidu while Jacob Dickson takes on  Paa Kwesi Ankrah in a Cruiserweight contest.

The weigh-in of the bill took place at Dezone on Friday in the presence of many fight fans who are expecting a great show by Bronx and Swavy Blu, the only promotional outfits at the 2022 annual convention of the World Boxing Organization (WBO).

Coach Carl Lokko, head trainer of the Bronx Boxing Gym says this is another opportunity for boxers to attract fans and media attention. He was optimistic that his wards will display and give fans a good night.

ALSO READ  Black Sharks prepare for AFCON Beach Soccer qualifier against Egypt
AMA GHANA is not responsible for the reportage or opinions of contributors published on the website.