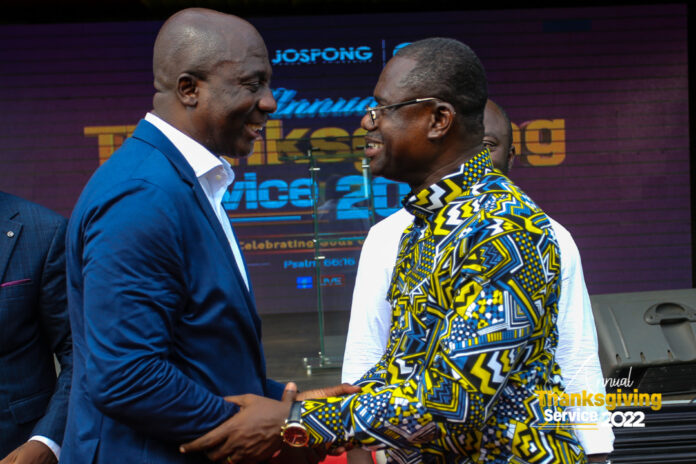 “A thoughtful reflection of the deeds of the Almighty God generates praises,” the Chairman of Tobinco Group of Companies, Elder Dr. Nana Amo Tobin I, has said.

According to him, this was critical, especially at all times, including the season the country finds itself.

Nana Amo Tobin I, who is the Chief of Apinto Traditional Area in the Western Region, made the statement on Wednesday, December 7, 2022, (day three of the ongoing Annual Thanksgiving Service-2022 of the Jospong Group of Companies (JGC) and Zoomlion Ghana Limited-ZGL) at the group’s head office at Ashalley Botwe-Nmai-Dzorn in Accra.

The thanksgiving service was also streamed live on various social media platforms and replicated at the regional offices of the group across the country.

Delivering the sermon on the theme: “Remembrance Engender Thanksgiving,” Elder Amo Tobin I admonished the gathering not to forget the mighty deeds of the Lord in their lives but reflect and offer thanks.

Quoting from the Bible- Psalm 103:1-2, which says, “Bless the Lord oh my soul and forget not all His benefits,” he urged them to reflect on mighty deeds in the past to inspire hope for the future.

Praises, he explained, emanate from the deepest part of the heart only if there was remembrance.

“If you have remembrance of the past miracles from the Lord, you will have every reason to thank God,” he emphasised.

Furthermore, he said one’s praises will be progressive only when one employs deep reflections in life.

He recounted an adventure while on his way from Nigeria some years back.

According to him, he was kidnapped by armed robbers who mercilessly beat him up and intended to kill him but for the intervention of the Lord through a lady.

He continued that the lady cried profusely and sought assistance from one police commander who instructed the robbers to release him.

Aside from that, he also recalled an incident that witnessed four heavily-built robbers storm his house and held his driver hostage after he had returned from an errand.

Since then, Nana Amo Tobin I indicated that he said he and his family have never seized praising the Lord for His mercies over their lives.

For his part, the Executive Chairman of JGC, Dr. Joseph Siaw Agyepong, charged the gathering of heads of department, staff members of JGC and ZGL, invited guests amongst others, that in spite of the ongoing challenges in the country, there was the need for them and by extension Ghanaians to offer thanks to God.

Expressing optimism, he encouraged the gathering that Ghana will not collapse but stand.

“In all the situations encountered in the country, what remains constant and must be consistent is thanksgiving and that is the game changer,” he underpinned.

He led the gathering to sing songs such as “Great is Thy Faithfulness and Now, Thank we our God” to the praise of the Sovereign Lord.

To keep hope alive, he announced that 30 minutes of the service for tomorrow was going to be used for outreach around the enclave of the group.

One On One Foundation Presents Citation To Sanitation Minister, Hon. Mrs....