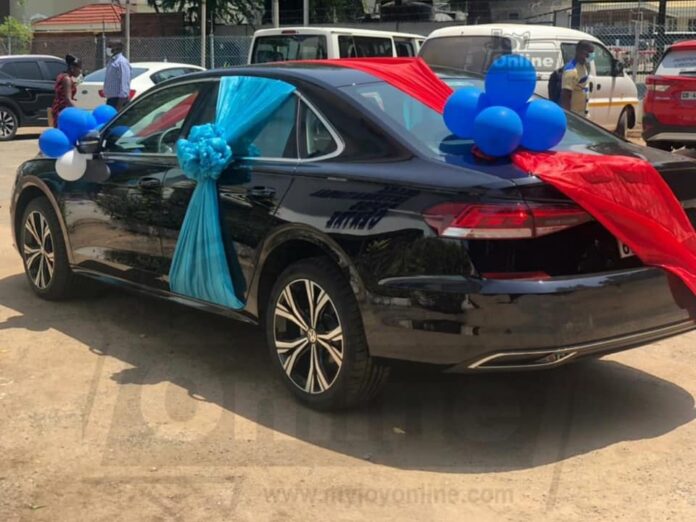 It was all joy, pomp, and pageantry at the premises of the Ghana Journalists Association (GJA) on Thursday as it presented a brand new vehicle to Multi-Media’s Samson Lardi Anyenini as the prize for winning the best Journalists of the year.

The Vehicle, VW Passat which was assembled in Ghana was donated to the Association by President Akufdo Addo for onward presentation to the winner of the most coveted prize.

The Minister for Information Hon. Kojo Oppong Nkrumah who handed the key of the vehicle to the GJA President Mr. Affail Monney reiterated the government’s commitment to continue supporting the media in the country.

He said it is the wish of President Akufo-Addo to see Journalists motivated enough to practice fearless and credible Journalism, hence the donation.

“We are hopeful that as we hand over this vehicle to you, we will continue with the collaboration that holds us together”,the Information Minister stressed.

The GJA President Mr. Affail Monney who received the key of the vehicle from the Information Minister commended the government for the gesture maintaining that the gesture will motivate Journalists to work to the satisfaction of all.

He revealed that after the Rawlings’ regime presented a vehicle to the late Albert Sam in 1991, successive Presidents including President Kuffour, President John Mahama and now President Akufo Addo have supported the Association.

He stressed however that the support received by the association from successive governments over the years does not compromise the Association in any way.

He said, instead, it strengthens the relationship between GJA and government whilst also empowering Journalists to practice credible and fearless journalism.

The GJA President later commended the recipient of the Car, Mr. Samson Lardi Ayenini for his journalistic acumen.

“Samson is in the bible. We need more Samsons in the media space so that they can do their work as fearless and professional”, Mr. Monney stressed.

On his part, the winner of the vehicle Samson Lardi Ayenini thanked the government and GJA for the surprise pulled at him.

He said when he won the award, he was informed that the Award comes with a prize but he never expected to receive a car adding that “ coming here today I thought I was going to receive a laptop”.

The host of Joy News’ current affairs host Newsfile, promised to continue practice impactful journalism be guided by the ethics of the profession.

“I will make myself available to champion fearless and credible journalism” he assured.