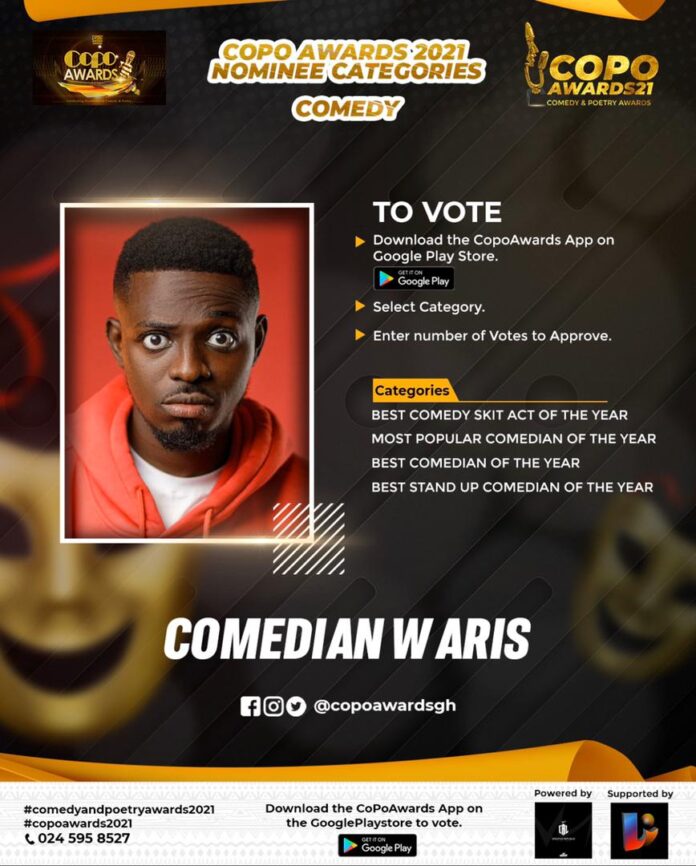 One of Ghana’s topmost Comedians, Comedian Waris has been nominated by the organizers of this year’s COPO Awards Ghana.

Comedian Waris has been nominated in four categories which include:

MOST POPULAR COMEDIAN OF THE YEAR

BEST COMEDIAN OF THE YEAR and

BEST STAND UP COMEDIAN OF THE YEAR

To Vote for Comedian Waris, download the COPO Awards APP on Google Play Store, Select Category, and enter the number of votes to Approve.

Comedian is the social media influencer for Flora Tissue and sanitary products produced by Delta Paper Mill Company in Accra.

Comedian Waris was born in Kumasi; his father is Umaru Ibrahim. He had his primary education at Kingsway School and went on to Odorgonno Senior High School. His tertiary education was at Top Media School where he graduated in 2014.

Waris worked as an attaché at both Top FM and Rainbow Radio as a sound engineer in 2014 later moved to Channel 5 TV in the same 2014.

In 2015 he worked at ecstasy entertainment as a stand-up comedian and personal assistant to award-winning comedian DKB.

He established the Waris Foundation, which occasionally donates to people leaving on the streets in Ghana.

ALSO READ  Judiciary to probe Muntaka's bribery allegations against a judge
AMA GHANA is not responsible for the reportage or opinions of contributors published on the website.