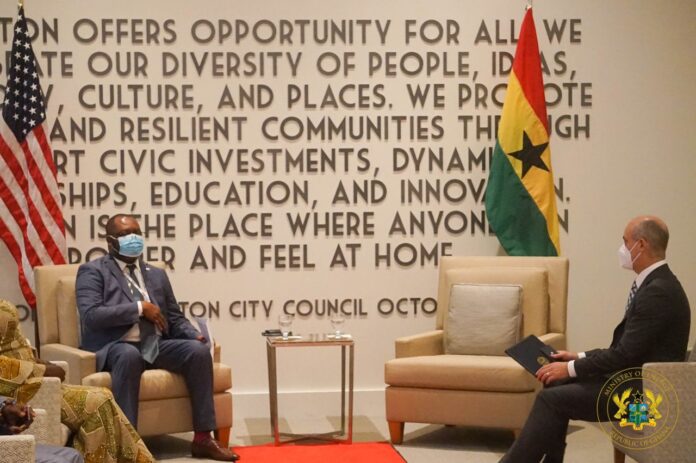 The Minister for Energy, Dr. Matthew Opoku Prempeh, has stated that the country’s huge gas reserves make it imperative for her to exploit and monetise them as leverage for her industrial takeoff.

Dr. Prempeh, popularly known as ‘NAPO’, made this call when he led a delegation to pay a courtesy call on the Mayor of Houston, Mr. Sylvester Turner, at his office in downtown Houston.

The Minister is in the United States for this year’s Offshore Technology Conference (OTC) which is currently taking place in Houston, Texas.

In attendance at the meeting were Ghana’s Ambassador to the USA, H.E Hajia Alima Mahama, Deputy Minister Hon. Egyapa Mercer, the CEO of the Ghana Investment Promotion Centre (GIPC), Mr. Yoofi Grant, as well as senior officials from the Ministry and some of its agencies.

Their discussions focused on the energy sector in the context of the energy transition, Ghana’s investment climate, international trade and empowerment of Africa in the global scheme of things.

In his remarks, Dr. Prempeh stated that Ghana’s first oil find in commercial quantities was by Kosmos, a Houston-based company, which left the country but is back.

He further emphasized on Ghana’s huge gas reserves which must be monetized for the benefit of our industrial agenda whilst making the case for companies to invest in Ghana.

He noted that energy transition need not mean an abandonment of our natural oil and gas resources, which is why Ghana is as this year’s OTC to encourage investment flows into the country’s energy sector.

“I can feel the pressure on African countries to conform to the energy transition agenda, even though Africa has contributed marginally to the phenomenon that is driving this agenda. We have so much gas that we need the cooperation of Houston and its domiciled energy giants”, the Minister remarked.

In agreeing with the Minister, Mayor Turner noted that from Senegal all the way to Angola, huge gas reserves in the Gulf of Guinea made it imperative to discuss ways in which the continent can benefit from them within the framework of the energy transition conversation, noting that through clean technology, investments in carbon sequestration etc, it was possible to make good progress towards clean energy and called on African leaders to be more involved in this.

“My commitment to Africa is very real, and people like me want to do everything we can to make it happen, which is why I think it is it important to have the continent’s leaders engage with the energy companies”, he stated.

In response, Dr. Prempeh revealed that West African energy leaders intend to meet ahead of the next World Congress on Petroleum in December 2021 to ensure synergies and coordination of their views and strategies for the industry.

On her part, Ghana’s Ambassador to the United States, H. E Hajia Alima Mahama, stated that Africa is going through some reforms and recognizes that she must develop through trade. She disclosed that the AU recently ratified the AfCTFA which is hosted in Ghana, so investing in Ghana is by extension an opening to a whole continental market.

On job creation in the petroleum sector, she remarked that “The downstream sector of will play a key role in the stability of the continent as it is a greater job creation tool”

The OTC, which started yesterday, will end on Thursday 19th August 2021. Among the Minster’s other engagements during the event are a keynote speech at a West African Oil and Gas Forum, an encounter with the Ghanaian community in Houston, and several private engagements with various key players in Houston’s energy space.

ALSO READ  Biden administration signals hope for a new START
AMA GHANA is not responsible for the reportage or opinions of contributors published on the website.