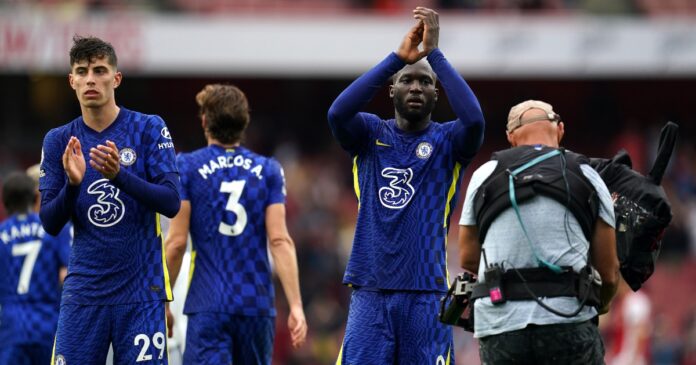 This third round of action in the new Premier League season features a busy Saturday book-ended by two thrillers: Manchester City hosting Arsenal at the Etihad Stadium in the early kick-off, and Liverpool tackling Chelsea at Anfield in the late game.

SuperSport viewers on DStv and GOtv can look forward to extended action from the Premier League, La Liga and Serie A, with matches scheduled to run from Friday 27 to Sunday 29 August 2021.

The Citizens v Gunners has been a very one-sided rivalry in recent times, though Arsenal manager Mikel Arteta remains determined to get one over his former mentor, Pep Guardiola.

“We must approach the game with the same mentality and aggression that we foster in training. We know that this will be one of the most challenging games in this early part of the season, but we will have confidence and belief that we can take the three points,” said the Spaniard.

The meeting of the Reds and the Blues at Anfield promises to be a fascinating battle between two genuine title contenders, with on-pitch showdowns such as Virgil van Dijk v Romelu Lukaku and Jordan Henderson v Jorginho. Yet it is the tactical battle of wits between Jurgen Klopp and Thomas Tuchel – who have been compared and contrasted so often in their careers – that will be the key element.

“We are a good football team, that’s all I know. I do not know who will be the best. But some clubs have the opportunity to join it, and we’re going to do ours to join the race for the league title,” said Klopp.

In between the two blockbuster games on Saturday, there will be some intriguing action in the mid-afternoon kick-offs, including a London derby between West Ham United and Crystal Palace, as well as Premier League rookies Brentford heading to Birmingham for a clash with Aston Villa.

Red Devils manager Ole Gunnar Solskjaer insists nothing is beyond his team: “It’s just how we fare between now and the end of the season,” said the Norwegian.

“How much sacrifice, how much discipline, how much team camaraderie, how much consistency, how much hard work, blood, sweat and tears – all these qualities and cliches. If you want to be the best you have to live like the best, you have to work as the best and perform every three days. It’s going to be tough, but it is possible, definitely.”

SuperSport is also the only place to get English commentary on the legendary La Liga!

The pick of matches from Spain’s top flight this weekend is its final clash before the international break, with La Liga champions Atletico Madrid hosting UEFA Europa Cup winners Villarreal at Estadio Wanda Metropolitano on the evening of Sunday 29 August.

The Rojiblancos are unbeaten in their last six league matches against the Yellow Submarine, but visiting manager Unai Emery has backed his team to pose a major threat to La Liga’s defending champions.

“We are excited for the challenge [of playing Atletico], we are going to be competitive on the day and give them problems to deal with. Beating a team of their calibre on their home soil is never easy, but we believe we have the talent and capacity to cause an upset,” said Emery.

“It will be great to have our supporters in the stadium for the visit of this big team,” explained the former Manchester City boss. “We went too long without having their voices behind us and I know they will be excited to cheer us against a big team like Real Madrid.”

Sunday’s early game sees Barcelona welcome Getafe to the Camp Nou. The Blaugrana are still a team very much looking to find their identity after the shock departure of Lionel Messi to Paris Saint-Germain earlier this month, but manager Ronald Koeman remains hopeful that his team will still have a great campaign.

“We are very pleased with the squad we have, the signings we have made and the young players who are making the step up, who will always form part of the future of this great club,” said the Dutch tactician.

“We are sure that we will make you very happy this season. With effort, sacrifice and hard work, we will try to do our very best [for the fans]. We know what it means to support and represent this club.”

This weekend’s Serie A action opens on Friday evening with Udinese hosting Venezia before champions Internazionale travel to the Stadio Marc’Antonio Bentegodi to face hosts Hellas Verona. The Nerazzurri have been stripped of key players – in particular, striker Romelu Lukaku – but manager Simone Inzaghi is determined that they will not let this affect them.

“The club have promised that the team will be as competitive as last season,” said Inzaghi. “We will have to find different ways of playing, new solutions to the problems that we will encounter, but that does not mean Inter will not be one of the top teams of Serie A.”

The pick of matches on Saturday sees Lazio in action against Spezia. Le Aquile are an intriguing prospect this season, having appointed the enigmatic Maurizio Sarri as their manager. Veteran midfielder Lucas Leiva hopes the players can adapt quickly to the new tactician’s methods: “Let’s rest, let’s get ready to start the season well. The key is the availability of the group to learn a different module, it is normal that there will be errors but we have had a good pre-season camp. If we want to learn we can do great things.”

Saturday also sees Juventus play their first home match of the season, as they welcome Empoli to the Allianz Stadium in Turin. With Massimiliano Allegri back in the manager’s seat, many have picked the Bianconeri as their title favourites, while former Juve and Italy boss Marcelo Lippi insists  Allegri “has no equal on a tactical level”.

“He is a champion in the interpretation of Italian football. He is a truly special tactician, not a strategist nor a screenwriter, he says it himself,” explained Lippi. “Max has a consolidated experience at the highest level. He knows how to manage the most delicate moments of the season and follows a precise method with strict rules.”

Moving onto Sunday, Napoli face a tricky trip away to Genoa, Jose Mourinho’s Roma will take on newly-promoted Salernitana, and Milan will fancy their chances of a three-point haul at the iconic San Siro when Cagliari makes the trip from Sardinia to the North of Italy.