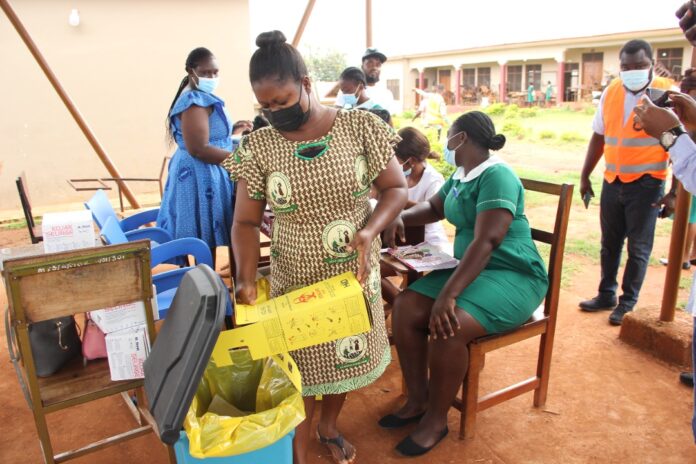 The proper and safe management of medical waste at vaccination centres in the Ahafo Region has served as a morale booster for health workers in the region.

According to the Medical Superintendent of Goaso Municipal Hospital, Dr James Ankomah, hitherto the disposal of medical waste had been a daunting task in terms of its handling and safe disposal.

“…And ever since the Ghana Health Service (GHS) in the Ahafo Region started collaborating with Zoomlion, the matter of handling medical waste has no longer been a problem,” he said.

Dr. Ankomah was speaking to journalists at the Goaso Municipal Hospital in Goaso on Tuesday, September 7, 2021, on the sidelines of a vaccination exercise.

He said with the introduction of waste segregation by Zoomlion has made it very easy to manage medical and general waste at the hospital.

He expressed his satisfaction at the response of residents to the ongoing vaccination exercise in the municipal.

He was very upbeat that their collaboration with Zoomlion would help curtail the spread of Covid-19 and other infectious diseases.

Dr Ankomah who also doubles as the acting Director, Clinical Case at the Ahafo Regional Directorate explained that research and innovation have helped in the proper handling of the virus.

That, according to him, has aided both the GHS and the government in the handling of the virus in the country.

On the vaccination exercise, he noted that the response of the general public has been encouraging since it started on Monday, September 6, 2021.

For the purpose of proximity, Dr Ankomah added that vaccination centres across the region have been decentralised to enable easy access by the residents.

Though, he said the vaccines were in short supply, he was optimistic that the government was in the process of getting more vaccines to suffice almost everyone in the region.

“There has even been pressure on us for the vaccines but we are hoping that the government is in the process of making more of the vaccines available to cover almost everyone in the region,” he said.

On misconceptions around the vaccines, he disabused the minds of many who still hold the view that there were ensuing side effects after taking the vaccines.

“I have taken my shot and all I felt was a slight headache and pains from the injection,” he narrated.

The Bono Regional Manager of Zoomlion Ghana Limited, Edward Ziddah, expressed his appreciation to the government and the GHS for the support in making the citizenry safe from the coronavirus pandemic with various measures including vaccination.

He said his outfit provided four coded bins for segregating the waste at every centre.

He called on Ghanaians to cooperate with his outfit to facilitate a smooth exercise.