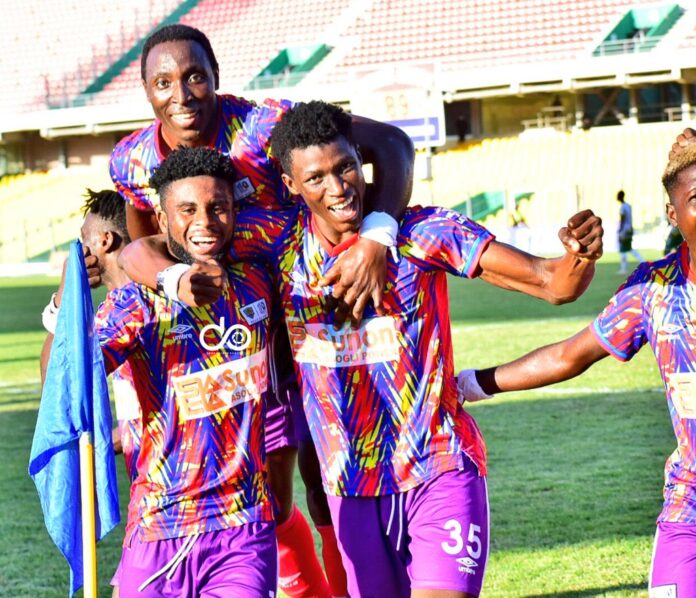 Ghana Premier League champions, Hearts of Oak have booked a date with Moroccan side Wydad Casablanca in the second round qualifying in the CAF Champions League after they dispatched Guinean side CI Kamsar 2-0 in Accra in Sunday afternoon.

Kofi Kordzi and new signing, Salim Adam grabbed the goals late in the game to send the Phobians through after a difficult start.

Hearts of Oak showed why they are champions of the GPL and started the game on a bright note, troubling their Guinean opponents. However, final passes in and around the 18-yard box of Kamsar lacked enough energy to trouble the visitors.

The first half ended in a stalemate as the two sides cancelled out each other to set up what will later become a Phobian win.

The introduction of Kofi Kordzi proved to be very instrumental as the GPL champions grabbed a late goal in the 83rd-minute with Kofi Kordze’s well placed free-kick beating the Kamsar goalkeeper.

Salim Adam on his competitive debut for Accra Hearts of Oak put the game out of sight for the Phobians with a belter of a strike in injury time. He opened himself up, invited the ball and lashed out an impressive strike to help seal qualification at the expense of the Guinean champions.

Accra Hearts of Oak will play Wydad Casablanca next on October 22, 2021.

ALSO READ  'Disgraceful' Hearts of Oak to touch down in Ghana on Friday after Africa campaign collapse
AMA GHANA is not responsible for the reportage or opinions of contributors published on the website.