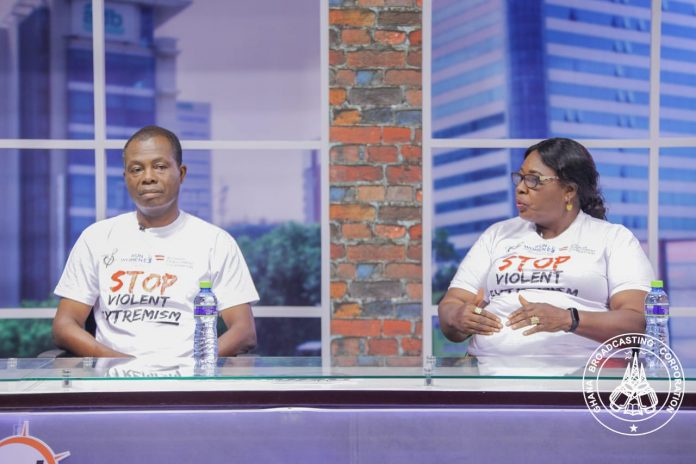 It is on record that 12 young men from Ghana have been recruited and are involved in violent extremist activities. These young persons are believed to have been recruited from the Northern part of Ghana and from notable Tertiary Institutions in the country.

President of the Network On Security and Peace for Women in the ECOWAS Region, (NOPSWECO, Ghana), Euphemia Akos Djator, disclosed this on the GTV Breakfast show.

Her mission on the show was to speak to how violent extremism was affecting women and how women could lead the way to empower themselves and bring along others in the conversation to eliminate the menace from society.

Violent Extremism simply means ‘’inflicting violence to perpetuate ideologies’’, Madam Djator stated. ‘’It could be religious or political etc. ideologies. Mostly these people have very strong opinions and they would like to impose it upon the people through violence,’’, She explained.

Madam Djator cited ‘’Boko Haram’’, (usually translated as “Western education is forbidden”) in Nigeria as an example of an extremist group.

It is known that the Boko Haram insurgency began in July 2009, when the jihadist group, Boko Haram started an armed rebellion against the government of Nigeria. The conflict takes place within the context of long-standing issues of religious violence between Nigeria’s Muslim and Christian communities, and the insurgents’ ultimate aim is to establish an Islamic State in the region.

Researchers have concluded that women are the nerve center of every society. Unfortunately, during violent extremists’ activities, these women become vulnerable, as in some instances their spouses are killed, placing additional burden on them to take up the entire responsibility as bread winners of their families, besides the already social and gender roles they bear.

The Network On Security and Peace for Women in the ECOWAS Region, NOPSWECO is of the view that violent extremism activities place an increased responsibility on women. This is why there is the need to educate and empower the youth against violent extremism and speak to its impact on society.

Madam Djator suggested that women should pay more attention to how their children are being socialized and how sibling conflicts are resolved.

“The way and manner families resolve conflicts would give the indication to the children as to how to handle conflicts,’’ she said.

She asked people to be more vigilant in their communities, so as to identify and clamp down on extreme terrorist activities.

Board Member of NOPSWECO, Ghana, Vincent Azumah said he chose to support the women to tackle violent extremism, because, ‘’if women do well, men would do better, it is important for every forward thinking man to support what women do’’, he noted.

Mr. Azumah disclosed that not only men are involved in violent extremism, for now women are also coming along.

“Lots of girls would be co-opted into the extremist groups, and once they have the ideology that is how it begins,’’ he stated.

He also disclosed that as many as 363 attacks are on record to have taken place in West Africa, in Niger, Burkina Faso, Mali, and Nigeria etc. by the close of 2020 alone. And from January through June 2021, as many as 540 attacks have so far occurred in the countries stated.

He edged the State to put in more mechanisms to support early warnings within communities.

“There should be more awareness created, the country’s porous borders must be checked, renters should keep an eye on their tenants and their activities, all these would help to curtail violent extremism,’’ Mr. Azumah stated.

Now how can a person help to detect if someone is involved in extremist activities. Researchers say such persons are usually isolated and withdrawn, some change their attitudes suddenly and begin engaging in very extremist conversations, usually highly political and ideological in some instances, some people also stay on their computers or handsets for countless hours.

Network On Security and Peace for Women in the ECOWAS Region, NOPSWECO is asking for more support to curtail activities of violent extremism, especially in West Africa. NOPSWECO is a network of about 600 persons from 15 ECOWAS countries concerned with promoting peace and security, and combating sexual exploitation and abuse against women amongst others.