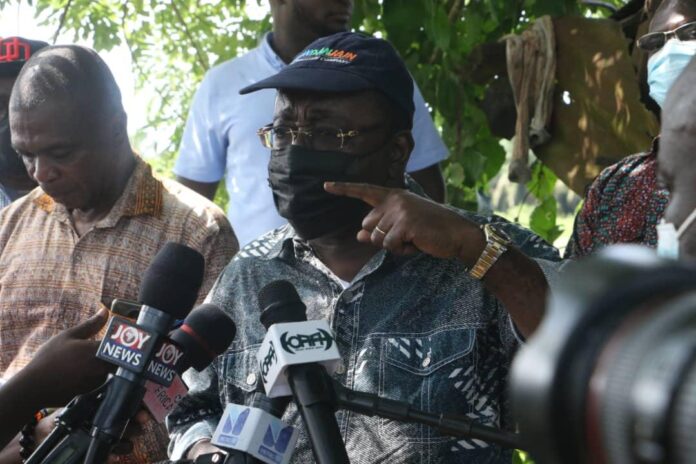 The Ministry of Food and Agriculture (MoFA) is seeking for money from the government to compensate poultry farmers who were affected by the bird flu disease.

According to the sector Minister, Dr Owusu Afriyie Akoto, poultry farmers who were affected by the bird flu should rest assured, disclosing: “At the moment, I have a memo at Cabinet, seeking money for compensation to the farmers. So they [the affected farmers] shouldn’t worry.”

The minister was speaking to journalists during the phase two of his agriculture tour in the Western North region on Tuesday, October 5, 2021.

Dr. Akoto said this was his second time of experiencing the outbreak of bird flu in the sector, recounting that “the first one, I was a Member of Parliament and a Ranking Member for Food, Agriculture and Cocoa Affairs in 2015, there was an outbreak and WHO came in with some compensation to the farmers.”

“Now that I am in charge nobody can come and tell me what to do,” he added.

He indicated that efforts were seriously underway by his ministry to curb the spread of the bird flu disease.

On the cocoa industry in the region, Dr. Akoto said despite the fact that it had been worst hit by the swollen shoot disease, the government has stepped up its efforts to revitalise the sector.

He buttressed government’s efforts in the cocoa industry by recalling how the government launched a cocoa programme in the region last year.

The minister said he has been having discussions often with the President regarding how to fund agriculture in the country.
That, he explained, had become crucial, especially when all the funding had been coming from the budget.

“And I have tried as much as possible to infuse the private sector participation. We are policymakers and what we do is to create an enabling environment for things to happen,” he said.

From the RCC premise, the minister and his entourage visited LB Farms Company Limited, a rice factory (LB.AROMATIC), at Sefwi Dwinase-Datano. The farmers here shared with the minister some challenges bedeviling the industry.

Among these were high cost of machinery (like combine harvesters, power tillers. Even at the subsidised price of 24,000-31000 Ghana cedis, the farmers lamented that they were finding it extremely difficult to purchase them.

Though Dr. Akoto presented them with some flexible terms of payment, he encouraged them to at least make a down payment of half the price of the various machines.

In turn, the rice farmers were happy and delighted to have the minister of agriculture pay them a working visit. The next port of call was visits to some rice fields also in Sefwi Asafo.

Earlier at the Western North RCC, the Western Regional Minister, Mr. Richard Ebbah Obeng, commended the agriculture minister for embarking on the tour to find out the state of agriculture in the region.

He was full of praise for the agriculture ministry’s initiatives including Planting for Food and Jobs.