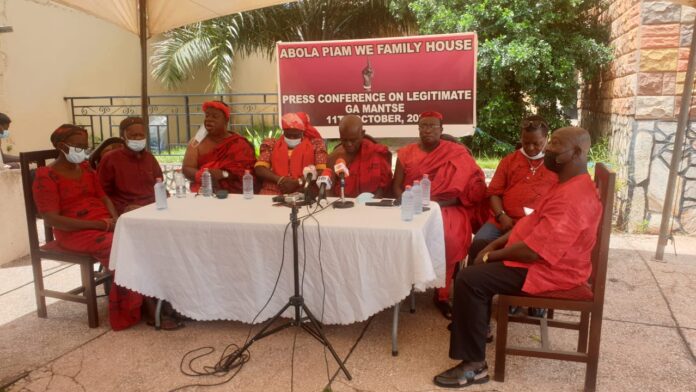 It appears from all indications that the protracted chieftaincy dispute that has hit the Ga Paramountcy in the recent past is far from over.

This follows a new twist where one of the Four Ruling Houses of the Ga Paramount Stool, Abola Piam We is discrediting and challenging the legitimacy of the current Ga Mantse, Nii Tackie Teiko Tsuru, who they described as an illegal chief.

The group held a press conference on Monday to set the records right on what has emerged so far after the death of the Ga Mantse Nii Amugi II.

Below is the full press statement:

Good morning Ladies and gentlemen of the media, the Abola Piam We Royal family, one of the four (4) Ruling Houses of the Ga Paramount Stool, has invited you to this press conference to lay bare the facts surrounding the legitimate Ga Manste if the Ga State who is in the person of Boni Nii Tackie Adama Latse ll.

With the demise of the late Boni Nii Amugi ll, Ga Manste on the 10th December 2004, and subsequent burial on 27th January 2007, it was obvious that it is the turn of Abola Piam We to provide a candidate for the vacant position of Ga Manste by the rotatory system as demanded by custom, the Ga Dzasetse, Nii Yaotey Otoga ll, and the Dzase sent customary drinks to Abola Piam We to provide a candidate.

The Abola Piam We Head of Family Nii Yaya Addy with the consent of the elders of Abola Piam We Ruling House initially Presented three (3) candidates namely:

And later added a fourth candidate in the person of-

Both George Tackie Abia and Kelvin Abia Tackie were borrowed from Teiko Tsuru We, and the Head and elders of Abola Piam performed customary “marriage” rites (“shibimor”) to families of the two borrowed candidates.

Out of these four candidates, three of them attended the vetting by the Ga Paramount Stool Dzase, they were the late Ayitey Canada, Kelvin Abia Tackie and George Tackie Abia. Before the vetting, each of the candidates signed a memorandum of understanding to effect that they will support any of them elected by the Dzase as Ga Mantse.

At the end of vetting, George Tackie Abia was elected and taken through all necessary customary rites relating to the enstoolment of a Ga Mantse with the stool name Nii Tackie Adama Latse ll.

Ladies and Gentlemen of the media, we wish to assure all that, our mandate of providing a Ga Mantse was fulfilled after the swearing-in and nothing can change it in the view of the fact that it is our turn by rotation and customary norms to perform that rights.

It is not contested that it is the turn of Abola Piam We to provide a candidate for enstoolment of the Ga Mantse and the necessary rites have been performed by the Ga Paramount Stool Dzase. Until the Ga Mantse is destooled, abdicates or dies, the Ga Mantse cannot be changed.

Boni Nii Tackie Adama Latse ll is alive. He has not been destooled, he has not abdicated and therefore he can not be replaced by anybody, institution, authority or government. The recent registration of Kelvin Tackie by the NHC as the Ga Mantse and the subsequent swearing-in by the GTC as the President is unlawful and contravenes, tradition, customs or usage. It is the wish of the Abola Piam Family that its decision be respected by all Ghanaians, Ghanaian institutions, bodies, and every other authority in Ghana.

Thank you for your attention

And long live the Ga State