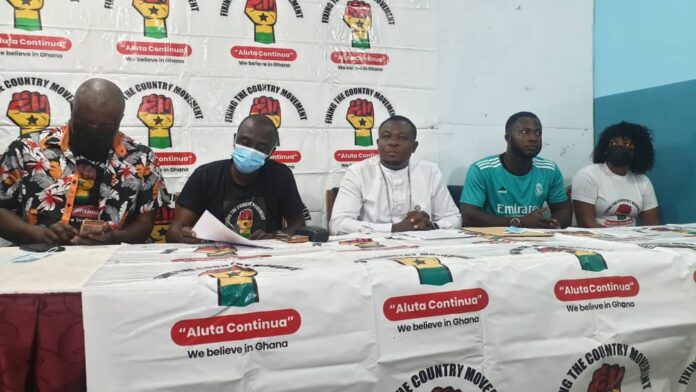 The Convener, Fixing The Country Movement, Ernest Owusu Bempah on Sunday 31st October 2021 at a press briefing in Accra set the records straight on the government abandoned E-Block School Project.

Below is the Full Press Release

Statement By Fixing The Country Movement At A Press Conference Held On Sunday 31/10/2021 In Accra On The Politics Of Abandoned Government Project.

Ladies and Gentlemen of the media, we are once again honoured to have you with us.

Our focus today is on the government E-block school project.

Ladies and Gentlemen of the media, there has been a lot of talks lately about the politics of abandoned government projects. And the E-block issue has dominated public discourse after the ultimatum issued to the government by the paramount chief of the Aflao Traditional Area, Togbui Amenya Fiti V.

We recall that in 2012, the erstwhile Mahama Government announced its intention to build 200 Community Day Senior High Schools in the country to enhance access to Secondary Education. It is instructive to note that contracts were awarded for 124 out of the speculated number of 200.

The World Bank funded the construction of an additional twenty-three (23) districts under the Secondary Education Improvement Project (SEIP), which commenced in July 2015. This brought the total number of the E-Blocks to 124.

To all intent and purposes, the former President completed only 29 out of the 200 E-Blocks before Ghanaians voted for a change in 2016 resulting in the election of President Nana Addo Dankwa Akufo-Addo and the governing New Patriotic Party (NPP).

The point must be made clear that before the inception of the Akufo-Addo government, only 29 E-block schools had been completed and operational with the rest either at ground level or not constructed.

Statistics from the Ghana Education service indicates that at the time the John Mahama-led government left office on January 7, 2017, only 29 out of 200 of its E block day schools project were completed.

Ladies and Gentlemen, records obtained from the Ministry of education indicate that the erstwhile Mahama government awarded a GHC 900 million contract to the construction companies to establish the E-block schools but failed to pay the contractors. It took the Akufo-Addo administration to pay off the debt to ensure none of the schools are abandoned but completed for all school children to benefit from the government’s free SHS programme.

According to the 2021 Budget statement, President Akufo-Addo has completed 31 of the E-blocks under the Secondary Education Improvement Programme and as part of increased efforts to provide infrastructure in the implementation of the Free Senior High School Programme.

Indeed, as of 2017 to Date, 31 new schools have been constructed bringing the total number of completed projects to 60 as of September 2020. It is important to note that all the 60 completed schools have been operationalized and are currently in use.

Per the Ghana Education service records, the remaining sixty-four (64) projects, have been categorized into three (3) groups. Category A includes twenty-one (21) structures at sixty percent (60%) and above the completion.

Category B consists of sixteen (16) structures which are between 25%- 60% completion. Category C consists of twenty-seven (27) terminated contracts which include projects that did not start and those that were at substructure level.

So between Akufo-Addo and John Mahama, who has invested heavily in education to increase access and improve quality?

Clearly President Akufo-Addo has been committed to completing these projects against claims that he has abandoned them.

Ladies and Gentlemen, if the one who initiated the E-Block projects was able to complete a total of 29 schools within the 4 years that he was in Government whilst the one who inherited it has also completed 31 of the E-Blocks within the same 4 years and handed over for use, which of the two is committed to making sure all these projects are completed? Don’t forget Akufo-Addo has to pay off GHC 900 million contract debt to the construction companies.

The claim that the E-block projects started by the Mahama administration have been abandoned by the Akufo-Addo-led government is farcical and it ought to be dismissed with absolute contempt.

That brings us to the significant strides that President Akufo-Addo has chalked in the Volta Region.

These infrastructure projects are in various sectors of the economy, including agriculture, education, energy, health, housing, industrial, market, railway, road safety, and security.

It is therefore misleading and very disingenuous for anyone to claim that the Akufo-Addo led government has abandoned the Volta Region in terms of development.

Again, the Akufo-Addo government made a promise to develop the country, improve the economy and ensure prosperity to the Ghanaian people and he’s delivering on his promise.

Volta Region remains the world Bank of the NDC and yet the 8years that the NDC was in power accounted for nothing with regards to development.

Ladies and gentlemen, how plausible is it for your stepmother to pull your ass out of the fire when your biological mother refuses to do so?

At least the NPP is honest enough not to give the people of the Volta region any promise they know they can’t fulfil.

It might behove the unintelligent excuse of opposition elements to check their facts before spewing their uneducated rhetoric.

As for Mr Mahama, the least said about him the better. It is comical how John Mahama out of desperation for power is driving himself to the edge with attention-seeking tantrums.

Mr Mahama is clearly acting like the arsonist who always expects to take credit for having extinguished the fire that he set. He cannot start a fire and then calls the fire department acting like a hero.

Our advice to Mr Mahama is that he should focus on redeeming himself and heed the advice being proffered to him by his family to retire permanently from politics.