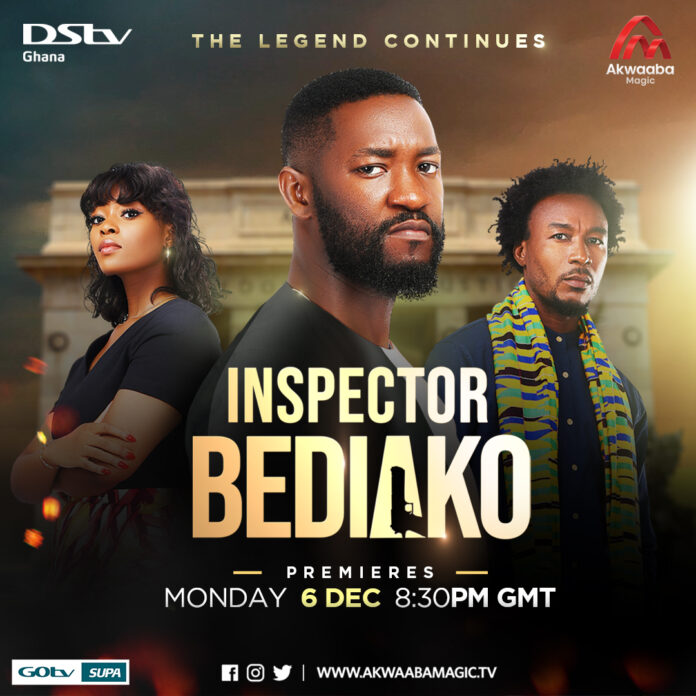 Akwaaba Magic has once again proven itself as the leading local television channel in Ghana. Since its launch, it has delivered premium content that has kept viewers glued to their screens 24/7/365.

Just when we thought that the channel could not surpass itself, we learned that it is set to launch yet another riveting investigative drama series titled Inspector Bediako, this December.

According to Kennedy Dankyi-Appah, Channel Head for Akwaaba Magic “the 1990’s Ghanaian detective drama series remained one of the most loved TV series ever produced in Ghana and that since the end of its production, calls continued to pour in for its continuation, thus, creating a fertile ground for the remake”. “Our mandate as a channel is to continue to find content that resonates with the audience,” Kennedy Dankyi-Appah added.

“The riveting dramatic serving recounts the journey of Isaac Kwame Bediako (also referred to as Ike on the show) stepping into his father’s (the highly reputable and prominent Inspector Bediako Snr.)  shoes. Under the watchful eyes of his father, superiors and envious colleagues, Isaac must match up or live to regret ever stepping forward to join the profession his father revered in,” said Dankyi-Appah. “Viewers can expect to witness a whirlwind of themes centred around heroism, patriotism, love, secrets, as well as greed and betrayal that most viewers can relate to,” he concluded.

The channel expressed its excitement with working alongside major players within the content curation space, like Ivan Quashigah; a multi-talented filmmaker with a vast amount of experience in the industry. Quashigah has produced and directed award-winning shows which include Things we do for Love, YOLO and To Have and To Hold.

It follows the life of Inspector Bediako Jnr, the son of the legendary Inspector Bediako Snr who used smart and creative detective means to investigate and solve domestic criminal cases, ranging from kidnapping, corruption, murder, and robberies to protect the public from danger. The show is a sequel to the hit 90’s hit series of the same title.

Set your reminders for the 6th of December at 8.30pm for the launch of this series and every Monday thereafter, to follow this story on Akwaaba Magic DStv Ch 150 and GOtv Supa Ch 101. You also get to witness the drama as secrets are revealed and manipulation is ensued in an attempt to get to the top in Inspector Bediako.