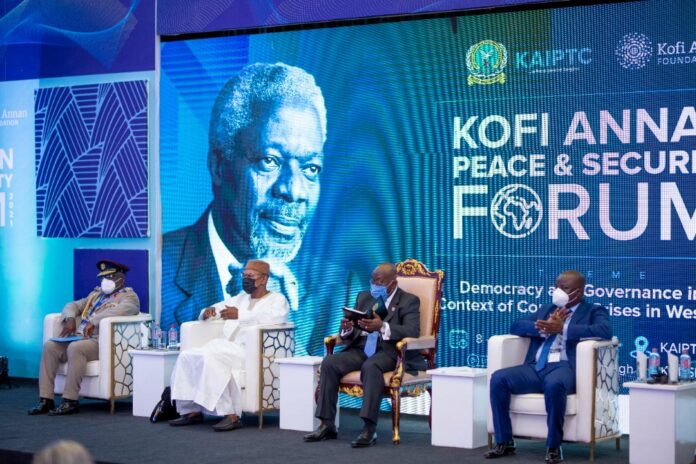 Chairman of the Kofi Annan Foundation, El Hadj As Sy, has bemoaned the recent overthrow of democratically elected governments in Guinea and Mali by a military junta.

According to him, the Coup D’etat in Mali and Guinea has jeopardized the gains made in entrenching and deepening democracy within the West African sub-region.

He was speaking at the 2021 and second edition of the Kofi Annan Peace Forum (KAPS) held at the Kofi Annan International Peacekeeping Training Centre (KAIPTC) at Teshie in Accra.

The event was graced specially by his Excellency Nana Addo Dankwa Akufo-Addo, President of Ghana.

The two-day programme was on the theme: ‘Democracy and Governance in the Context of Complex Crises in Africa’.

His Excellency El Hadj As Sy said ECOWAS enshrined democratic gains exactly 20 years ago, by adopting its Protocol on Democracy and Good Governance in Dakar in December 2001 but events over the past few years, and particularly the coups in Mali and Guinea, have sounded the alarm;

“The democratic gains of yesterday are in jeopardy today. Academic research has amply demonstrated not only the correlation between democracy and peace, inclusive economic development, the respect for human rights, good governance and even life expectancy; it has also highlighted the link between growing authoritarianism and political instability, coups d’Etat and even insurgencies. Put simply, if a disgruntled population does not believe it can achieve peaceful change via the ballot box, it will find alternatives. It is only a matter of time,” he said.

He said Kofi Annan knew that there could be no lasting peace without democracy, both domestically and internationally, which is why he worked tirelessly to promote and support democracy, first at the helm of the United Nations and later through his Foundation.

“As we all know, much of West Africa was plagued by coups and civil wars in its first decades of independence. But West Africa was also the first region on the continent to democratise after the end of the Cold War, setting the stage for two decades of stability and growing prosperity,” he said.

He further lamented the emergence of digital communication channels which have opened a new space for political debate and civic engagement, but have also allowed the proliferation of disinformation, fake news, and hate speech, manipulating voters and weakening trust in institutions all over the world.

“The pandemic has only accelerated and exacerbated the anti-democratic trends at work. Some leaders argue that democracy is over-rated and that what their people want is economic development, which is better served by so-called strong leadership.

There are at least two problems with this argument. First, the evidence, particularly in Africa, shows that democracies have economically outperformed their authoritarian counterparts in most cases.  Second, Afrobarometer, whose founders and leaders are here today, has shown year after year, for two decades now, that a large majority of West Africans want more democracy, not less.”

He praised Ghana and President Nana Akufo-Addo for setting the pace as the beacon of democracy in Africa.

“I would hereby like to applaud His Excellency President Nana Akufo Addo for showing leadership on this issue. Not only by hosting this conference in Accra but, more importantly, by calling for a revision of the landmark Protocol on Democracy to include term limits and constitutional protections. As the leader of one of Africa’s leading democratic success stories, and an eloquent advocate, democracy in West Africa Ghana could not have hoped for a better champion.”

He encouraged the participants to end the conference with a call to action to ensure West Africa’s democratic future.

“As 111 world leaders gather for President Biden’s Summit for Democracy, we have an opportunity to show the world that West Africa is actually ahead of the curve,” he concluded.

About the KAPS Forum

Organised jointly by KAIPTC and the Kofi Annan Foundation in Geneva, it is the biggest gathering of leaders from the continent in memory of HE the late Kofi Annan, former UN Secretary-General, who was a fiery advocate of peace and security across the globe.

Mr. Annan, who led the United Nations from January 1997 to December 2006, had an understanding of peace founded on a holistic vision of societies based on good governance, democracy, and human rights, especially in Africa.

Over the years, KAIPTC, which was named after him, works to promote peace and security across the continent.

The 2021 KAPS Forum is sponsored by the Federal Government of Germany, through GIZ, the Governments of Norway, Sweden and Ghana.