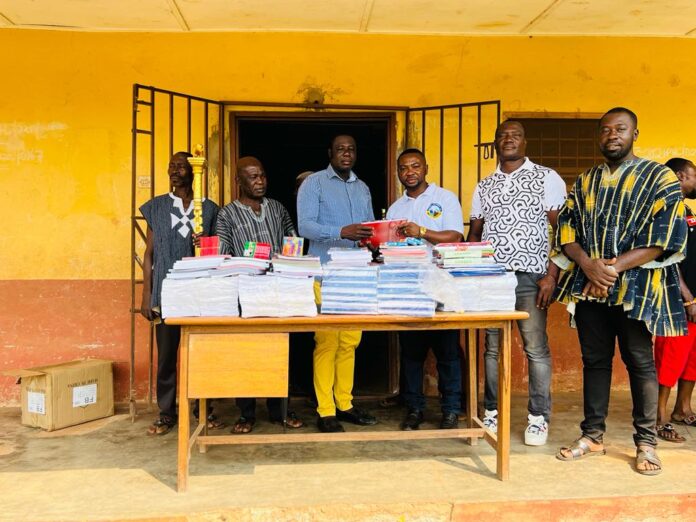 Osafric Ventures Ltd., a mining and construction company has donated some teaching and learning resources worth GHC7000 (Seven Thousand Ghana Cedis) to the Gyampomani Presby Primary School located in the Fanteakwa South District of the Eastern Region.

The items were presented on behalf of the company by the Chief Executive Officer (CEO) of Osafric Ventures, who prefers to be addressed as the main servant of the company, Mr. Oscar Sarfo Adu, and his company delegation.

According to the CEO, the donation formed part of the company’s Corporate Social Responsibility (CSR).

Mr. Sarfo Adu reiterated that education was key to the development of the country and it must be a collective responsibility of all in order to complement government’s efforts to improve upon the system.

“Also, Osafric, with the motto; service, our pride, takes delight in helping the less privileged in society so as to bridge the poverty gap,” the CEO emphasized.

On his part, Hon Maxi Kwadwo Appiah who represented the Fanteakwa South District Chief Executive, Hon. Ernest Ofosu expressed his profound gratitude to Osafric for the kind gesture to the school and the entire Gyampomani community.

He assured the team that he will task the teachers to handle the teaching and learning resources with care as well as ensuring fair and equitable distribution of the items to all beneficiary pupils.

In a remark, the Head Teacher of the School, Mr. Jonas Modzaka, expressed his deepest appreciation to the community and company.

“We are indeed grateful for this gesture done us by Osafric and like Oliver Twist we further appeal that the company comes to the aid of the community to help repair computers in the School’s ICT Lab which has stalled the teaching of ICT in the school.”

The Liaison Officer of Osafric, Hon. David K. Amponsah explained to the community that the Osafric Mining is a small scale-mining company but the company has been the pacesetter in terms of CSR.

“I would like to also appeal to small-scale mining companies to take their CSR seriously since it brings good relationships between communities and mining firms,” he said.

The Chief of Gyampomani, Barima Boama Darko III, who graced the presentation ceremony also thanked the company for such an unprecedented gesture and tasked others in the District to emulate what Osafric Mining and Constructions Ltd. has done.

They both have more than ten (10) years of experience in the transport and freight industry. Through their expertise, they have been able to bring the operations of the business to profitability within its first year of operation.

From its humble beginning in the year 2013, the company started out with a home base office located in Tema, community four (4).

Today, OSAFRIC is a well-recognized freight forwarding company in Ghana, registered under the Companies Code of Ghana (1964), Act 79. The company currently deals in clearing and forwarding, warehousing, import and export, consolidation, haulage, and general merchant.

OSAFRIC is a registered company in Ghana, a member of FIATA, Customs Brokers Association of Ghana (CUBAG) as well as Customs House Agent with Ghana Ports and Harbor Operating licenses.