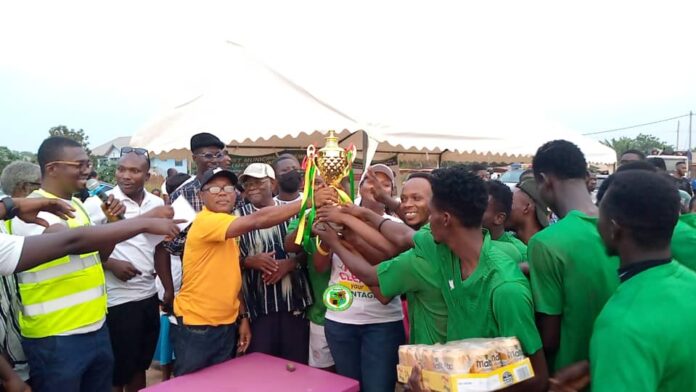 The Ga East Municipal Assembly (GEMA), on Saturday, 5th February 2022, organized a football gala competition at the Abokobi Town Park as part of efforts to intensify awareness of the “Operation Clean Your Frontage” sanitation campaign.

Hon. Elizabeth Kaakie Mann symbolically opened the competition with the first kick of the ball from the centre line at 1:30pm after a welcome address had been delivered by the Chief of Abokobi, Hon. Samuel Nii Adjetey Mohenu.

In the first game, Abokobi defeated Ablorh Adjei one-nil (1:0), with the goalkeeper of Ablorh Adjei taking an early shower in the first half as he was red-carded for offensive conduct towards the referee.

Team GEMA, which had not had any prior training, unfortunately, lost to Agbogba on 3-4 penalty shoot-out after a one-one draw game.

Team GEMA took the lead earlier in the first but Agbogba equalized with some 10 minutes to the end of the match.

Ablorh Adjei and GEMA took the third and fourth places respectively in a pulsating encounter which ended in a goalless draw with Ablorh Adjei winning 5:3 on penalties.

In the finals, Abokobi played a goalless draw game with Agbogba, coached by the Assembly Member for Agbogba, Hon. Dennis Mensah Sowah. However, Abokobi won the coveted trophy at stake 6:5 on penalties.

The matches were officiated by Isaac A. Tsakley, Adjei Layee Abass, and Isaac Sowah.

The Municipal Environmental Health Officer (MEHO), Charles Ampomah Asabre, the lead officer in the organization of the competition, and the coordinator – Kenneth Daniels, the Deputy Director of Administration at GEMA, led the Hon. MCE, Nii Abokobi and the Hon. PM to present the prizes to the teams as follows:

1st, Winners – Abokobi: a trophy, a football, cash, a set of jerseys, cartons of assorted drinks, and packs of bottled water

2nd – Old Agbogba: a football, and a cash amount, assorted drinks, and packs of bottled water