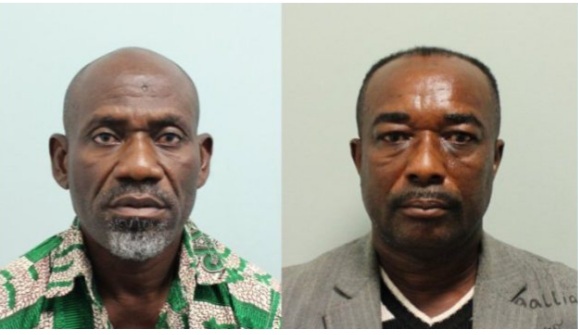 The Isleworth Crown Court in the United Kingdom has jailed a four-member drug syndicate of Ghanaian origin for trafficking 38 kilograms of cocaine with a street value of over 2.88 Million pounds.

The syndicate is said to have trafficked the drugs from Ghana to the UK.

They are all serving between six years and nine months in jailA statement from the Narcotics Control Commission (NACOC), said the arrest and prosecution was jointly done by NACOC and the National Crime Agency (NCA) of the UK.

The Narcotics Control Commission, NACOC said in January last year, it initiated an investigation into the activities of a syndicate identified for trafficking cocaine from Ghana to the UK through the Kotoka International Airport.

According to the Commission, investigations led to the arrest of Mr. Appiah on April 30, 2021, at Heathrow Airport for attempting to traffic into the UK, 17kgs of cocaine worth 1.3 million pounds, which was hidden in food boxes.

The arrest of Mr. Appiah resulted in a joint operation between the Narcotics Control Commission and the UK’s NCA, dubbed “Operation Grid,” which was aimed at fishing out other members of the syndicate.

The Commission said during the operation, other members of the syndicate were identified. It said on May 14 last year, Mr. Gyamfi and Ms. Agyeman travelled through Kotoka Airport to the United Kingdom and upon their arrival at Heathrow the next day, they were arrested for attempting to traffic into the UK, 15kgs of cocaine worth 1.1 million pounds.

The cocaine was found concealed in the base of the suitcase of Ms Agyemang, and forensic analysis also revealed a high reading of cocaine on the suitcase of Mr. Gyamfi.Regarding Mr. Puplampu, the Narcotics Control Commission said he left Ghana for the UK on August 13, and was arrested upon arrival at the Heathrow Airport the next day for attempting to traffic six kgs of cocaine worth 480,000 pounds.

The drug was found concealed at the base of his suitcase in a similar fashion to that of Ms Agyemang.

NACOC said Mr. Puplampu had a previous conviction in Ghana for a similar offence, where he was jailed 10 years in 2012, following his arrest for drug trafficking.

The Commission said the government would continue to collaborate with international partners to protect the borders and communities from drug syndicates using the country as a transit point for illicit drug trade.