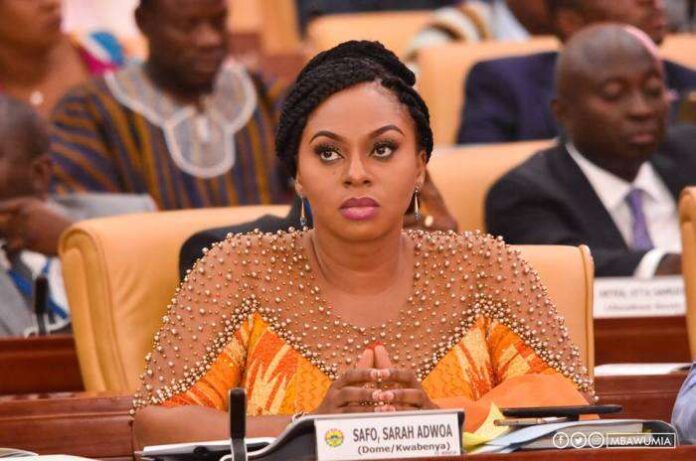 The Speaker of Parliament, Alban Bagbin has refuted rumors making the rounds that Dome-Kwabenya Member of Parliament (MP) Sara Adwoa Safo sought permission from him to be absent.

According to him, he has been having numerous calls from the media whether or not he granted the lawmaker permission to be absent from the House for the number of days.

“She didn’t receive permission from me to absent herself from Parliament on health grounds. I want it to be known by all that I have not granted any such interview anywhere. I have not said anything like that anywhere.

The Dome-Kwabenta MP is reported to have been absent from Parliament for some time which has angered a section of her colleagues in the House.

Member of Parliament for Assin Central in the Central Region, Kennedy Agyapong has accused Adwoa Safo of holding the governing New Patriotic Party to ransom.

ALSO READ  Engaging Priority Clients to Invest with a Purpose

“Adwoa Safo is holding the whole NPP to ransom. It is the truth I’m saying. I won’t cover it up because I have two children with her so when she is doing something which is wrong, [I won’t say it]. What is going on in NPP is very annoying. We have pampered some people to the extent that they have become tin gods,” he said on his radio network Oman FM last Thursday.

The complaints come on the back of a similar one by another party member in the House Michael Kofi Okyere Baafi who also accused the Dome Kwabenya MP of sabotaging government business.

According to the deputy Trade Minister, his colleague is making demands on the party and President before showing up in the House for business.

“All the problems government is facing are attributable to Adwoa Safo. Clearly, her intention and posture show that she wants to sabotage NPP. All 136 NPP MPs are always in Parliament except for Adwoa Sarfo. One person cannot hold the party to ransom,” he said on Peace FM.