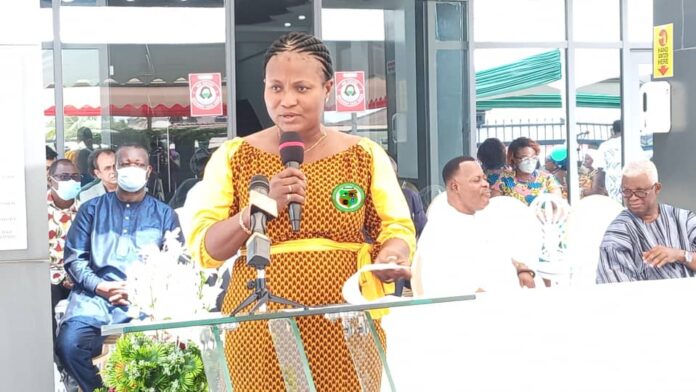 The Municipal Chief Executive (MCE) of the Ga East Municipal Assembly (GEMA), Hon. Elizabeth Kaakie Mann, has commended the Founder of Chrispod Hospital and Diagnostic Centre, Ambassador Christian Kpodo, for his vision in establishing the facility in Dome Oko in the Municipality.

The Hon. MCE on Thursday, 24th February, 2022, joined the Founder and her mother Madam Charity Kpodo and other dignitaries and stakeholders including Nii Boi Legon, Chief of Oko, Queenmothers, the Clergy, Imams, and Health professionals to commission the facility.

The construction of the Chrispod Hospital and Diagnostic Centre started in 2015 following the decision of the Founder to convert his then residence in fulfilment of his dream to help address the healthcare needs of the people of the country.

Others are children’s ward, 100-capacity morgue, and laboratory equipped with CT scan, MRI, and ultrasound scanners.

The hospital also runs an ambulance and 24-hour service as well as a diagnostic centre equipped with ultra-modern equipments to meet the needs of patients.

According to Ambassador Christian Kpodo, his vision for establishing the hospital stemmed from the lack of basic facilities such as beds and the struggles people go through in accessing quality healthcare in most of the public hospitals in Ghana.

With these poor conditions, he decided to start saving, even the little that he had to finally make his dream of building the hospital a reality.

He paid glowing tribute to his mother, Madam Charity Kpodo, for raising him well for him to realize his dream.

“I want to thank my mother very much for being behind me in prayers, sufferings and everything”, he said.

In her address, the Ga East MCE, Hon. Elizabeth Kaakie Mann, who was a special guest of honour at the event, commended the Founder of the hospital for choosing the municipality for the establishment of the hospital.

She was optimistic that the presence of the hospital would go a long way to enhance healthcare delivery within the municipality and the country at large.

Hon. Kaakie Mann encouraged the residents within and outside the municipality, particularly those within hospitals catchment area, to seek healthcare from the hospital.

She said the Ga East Municipal Assembly will help in creating awareness on the hospital to ensure the public know about it and access their services.

She also indicated that the Assembly will provide technical guidance to help expand the facility when necessary to accommodate more patients and also expand their services to serve the rapidly growing community where it is located and the municipality as a whole.

“I am confident that the equipment here in this hospital will radically improve the quality of service and infrastructure for patients and staff, now and in the years to come”, she stated.

The Medical Director of the hospital, Dr. Eli Atikpui, stated that together with the staff, they will endeavour to take very good care of the facility so that in a few years to come, people will wonder if the facility is really being used.

“Myself and the staff do pledge that we’re going to make this place a place where people would want to come back”, he stated.

He announced that aside from the general medical care, the hospital will render a number of specialist services which include paediatrics, gynaenacology, obstetrics, neurology, and orthopaedics.

He also stated that the hospital envisions becoming a specialist centre that would provide specific medical care for those who need them, beginning with kidney transplants and related issues.

The Municipal Director of Health (MDH), Dr. Selorm Kutsoati, was happy about the establishment of the facility and expressed optimism for its contribution to healthcare delivery in the Municipality.

“I am delighted to be part of the opening of this new health facility. The health Directorate’s initial engagement with Management has been very good and I believe that, we will collaborate to work together and improve healthcare provision for the people of the Municipality. I know that having Dr Eli Atikpui as the Medical Director will ensure that, everything is done excellently”, she remarked.

Dr Eli Atikpui conducted the dignitaries around the facility to have a first-hand feel and information on the various sections and equipments.