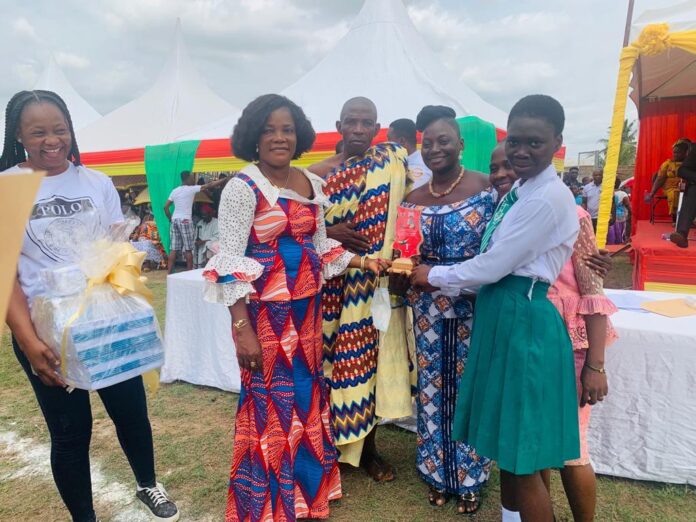 The District Chief Executive for Obuasi East Honorable Faustina Amissah has added her voice to the calls by the Government for Ghanaians to honour their tax obligations to accelerate development.

Honorable Amissah made this call when she delivered the keynote address at the 65th Independence day anniversary celebrations held at Boete in the Obuasi East District.

It would be recalled that the Finance Minister, Ken Ofori-Atta, at a town Hall meeting at Sekondi, appealed to citizens to honour tax obligations, required by the State. One of such taxes is the E-levy which according to the Minister, will help mobilise revenue for development, hence citizens should rally behind its implementation.

Touching on the theme for the celebrations ” Working Together, Bouncing back better “, the DCE called for unity and the need to eschew divisiveness. She said ” the theme is very appropriate judging from the devastating effect of Coronavirus on the economy of the country and that of the rest of the world, we cannot bounce back when we are not united”.

GHANA CARD TO BE USED FOR MAJOR TRANSACTIONS IN THE DISTRICT

HonFaustina Amissah in an interview with the Media at the sidelines of the event revealed that by the end of July, 2022, the Ghana card will be used for major transactions in the District. She however encouraged residents to register and acquire their cards irrespective of the challenges they will encounter at the registration centers.

LET’S BELIEVE IN OUR CAPABILITIES

The Member of Parliament for Obuasi East Constituency, Honorable Patrick Boakye Yiadom has said that he disagrees with the assertion by section of Ghanaians that independence came too early.

Dr. Boakye said Ghanaians must start to believe in their capacity and capabilities.

He said, “it is about time Ghanaians realised that we have the wherewithal to develop as a country and become the beacon of hope for Africa “.

He again admonished Ghanaians to take charge of their destiny and contribute towards the development of the country.

At the end of the march past competition which climaxed activities for the celebrations, Bryant Mission was crowned winners in the Primary category with 76.66 points whiles Rising Sun Academy and Lovely Home Academy won the 2nd and 3rd positions respectively.

Presentation of our lady Girls Cadet was also adjudged winners in the Cadet category with 68.33 points.