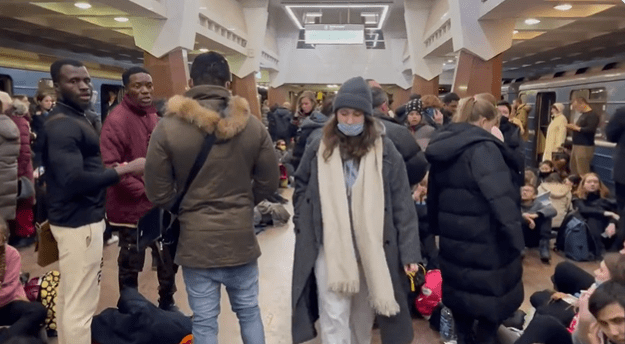 Some 54 Ghanaian nationals who were caught in the Russian invasion of Ukraine have arrived home from Romania, where they sheltered.

They arrived Monday morning at the Kotoka International Airport.

On March 1, 2022, the first batch of Ghanaians who held in the crossfire returned home through the efforts of the foreign affairs ministry.

Meanwhile, Deputy Minister for Foreign Affairs and Regional Integration, Kwaku Ampratwum-Sarpong, has revealed that fifteen Ghanaian students have refused to return to Ghana, although the government has provided air tickets for their trip.

He also added that the students communicated their decision to stay on Thursday, March 3, 2021; after the government had paid for their tickets.

Explaining the basis of their refusal to return home, Mr. Ampratwum-Sarpong, disclosed that, the students have been given various offers in Hungary for them to continue their education.

He said, there are schools in Hungary, who have expressed their willingness to offer accommodation and tuition to the Ghanaian students, hence their refusal to join the evacuation flight. The Minister added that, the parents of some of these students have approved their wards’ decisions not to return to Ghana.

ALSO READ  FIFA rejects Russia's petition to overturn World Cup Play-off ban
AMA GHANA is not responsible for the reportage or opinions of contributors published on the website.