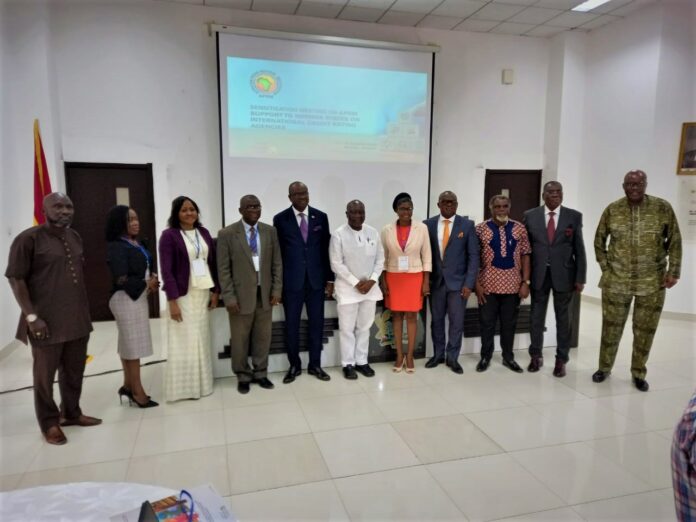 The workshop was formally opened in Accra on Thursday 17th March 2022 at Ghana’s Ministry of Foreign Affairs and Regional Integration and recorded successful deliberations.

The meeting discussed the challenges faced by Ghana during its sovereign credit rating assessments and in implementing rating recommendations.

The event, which served as a platform for deeper discussions on International Credit Ratings informed key stakeholders in Ghana about the APRM work on supporting countries in the area of international credit ratings.

The APRM is an African-owned and African-led platform for self-assessment, peer-learning, and experience-sharing in democracy and good governance, in full respect for democratic principles, human rights, rule of law, the acceleration of political, social, and economic integration in Africa.

The workshop gathered participants including private sector entities, Institute of Directors’ members, policymakers, regulators, Chambers of Commerce, and other relevant stakeholders in Accra.

The main aim of this engagement was to improve the outcomes of future credit rating reviews through enhancing the engagements between international rating agencies and the representatives of the government.

Since receiving the mandate to support countries from the AU Assembly, the APRM has achieved significant milestones, including developing a Policy Framework of mechanisms for the provision of support to countries in their engagements with international credit rating agencies.

In a speech delivered, Professor Eddy Maloka, the Chief Executive Officer of the APRM, reiterated that the meeting was convened to inform key stakeholders of the APRM work on credit ratings and to discuss various challenges with rating agencies being faced by Ghana.

“The challenges being posed by international rating agencies are not unique to Ghana, the whole continent of Africa has been grappling with unjustified negative rating actions at different times. Over the past 2 decades, we have witnessed a deterioration in credit ratings, which clearly do not reflect the average improvement in political, economic, and social indicators in Africa. This explains the rise in discontentment on the contact of international rating agencies,” the APRM CEO underscored.

He continued that as done by Ghana, various other governments have issued statements registering their displeasure on the conduct of rating agencies.

Professor Maloka said Tanzania, Nigeria, Namibia and Mozambique are amongst other African countries that have raised concerns on the non-consultative nature of rating agencies.

“The record number of sovereign rating downgrades of African countries since the outbreak of COVID-19 on the continent in March 2020 has indeed justified the rationale behind the African Union Assembly Decision, Assembly/AU/Dec.631 (XXVIII), adopted by Heads of States and Government at its 28th Ordinary Session held in Addis Ababa, Ethiopia in January 2017, directing the APRM to provide support to AU Member States in the field of Credit Rating Agencies,” he said.

He decried the downgrading of some countries even when they were yet to even record a single case of the COVID-19 pandemic.

“Some countries were downgraded before they even registered a single case of Covid-19. Most of these rating decisions were merely based on expectations that countries’ fiscal situations would deteriorate and their health systems would be severely strained by the pandemic. These downgrade decisions were monumentally premature and unjustified,” he emphasized.

“Once downgraded, like a self-fulfilling prophecy, even countries with strong macroeconomic fundamentals deteriorate to converge with model-predicted ratings where investors respond by raising the cost of borrowing or by withdrawing their capital, aggravating a crisis situation.”

He noted that the impact of these rating downgrades has been far-reaching and continues to threaten the sustainability of public debt due to high borrowing costs.

“As witnessed during the height of the Covid-19 pandemic, many African countries missed the opportunity of participating in the G20 Debt Service Suspension Initiative for fear of being downgraded by the international rating agencies. A few that participated suffered rating downgrades mainly because rating agencies classify them as defaulters.”

These developments magnified the impact of the COVID-19 pandemic on African economies, many of which are still suffering the severe strain on their fiscal positions. Other international organisations and regulators, such as The United Nations Human Rights Council raised similar concerns that the assessments of international rating agencies lack human rights considerations, is reducing fiscal space for governments to invest in health services, vaccines or social protection when it is sorely needed and is making Government’s efforts to contain debt crisis ineffective. This is increasing the suffering of the general population.

Finance Minister, Mr. Ken Ofori Atta on his part pointed out the lack of transparency in methodologies, procedures, practices, and processes was a key challenge to ensuring fairness in ratings.

“Also, the persistently low sovereign credit ratings on the continent since 1994 has been a stumbling block to access finance on the international market for the development of the continent,” he said.

“It is unfortunate that these agencies still remain the best available source of credible risk information for emerging economies to access international capital despite being accused of contributing to the global financial crises around the world at different points in history.”