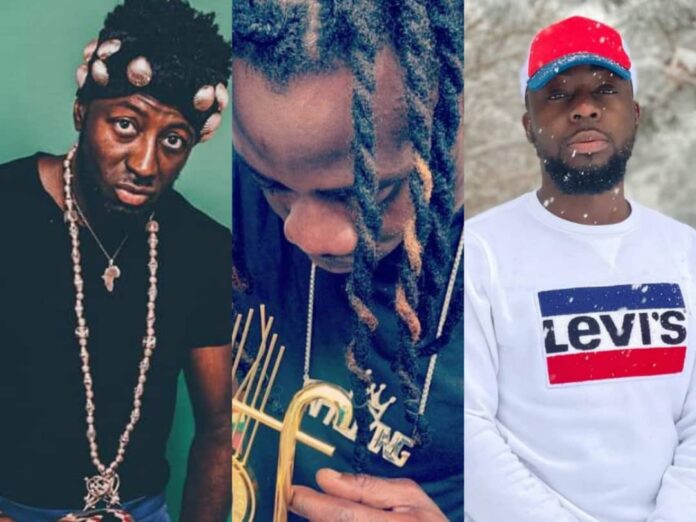 Over the years we have seen a lot of great musicians from Ghana doing so well but have had to stay permanently in the USA, some were not able to stay relevant after they moved and have dropped dead ever since they left Ghana for the US, a typical example is ASEM.

We’ve also seen a few ones who after leaving, are still doing their best and are releasing songs as if they are still here with us in Ghana.

Lukeman Ekow Baidoo, who performs under the stage name Teephlow, is a Ghanaian award-winning hip-hop recording artist. He was first noted at the maiden edition of the 2012 “Next Big Thing in GH Hip Hop” Talent Hunt Show. He released his debut single, The Warning, in 2014 featuring Sarkodie.

The rapper after dropping a few hits like Elevation featuring Samini, Odo featuring Kelvyn Boy, Genesis among other great tunes have earned the name as the king of wordplay in Ghana.

Last year Teephlow announced he will be retiring from music after a long year of not finding it purposeful but comments from fans and well-wishers asked him not to. He later dropped 6 feet to announce his come back and it has been great so far.

Another act doing so well in the US is Ohene Kwame Ntow. Ohene Ntow is a Ghanaian-born US-based rapper who is a businessman and a musician who has over the years invested in all round of businesses including his most recent Shoe Line dubbed “Ohene” which is doing so well and competing with notable shoe brands.

All (Ohene) custom shoes are handmade by master Italian craftsman from pristine Italian leather. Each designer pair is a one-of-a-kind, combining handcrafting tradition, quality, and modern style for a product that’s perfectly Italian.

In music, the rapper has shown dexterity in performing and has performed on well-known platforms in Ghana and beyond. Ohene Ntow has songs like “Fatofom, “Boss”, “Money” “Sugar Banana” among other well relatable songs from his camp with a couple of good features.

Recently Rapper Ohene Ntow got engaged to his long-time girlfriend Rose in the US and are set to take things to the next level.

Nana NYC is one of the top Ghanaian acts doing music outside the shores of Ghana and cannot be ruled out of the list of Ghanaians doing music in the USA.

Nana Yaw Boateng, popularly known in the music circles as Nana NYC, is a U.S based Ghanaian artiste making huge waves in the entertainment business throughout the world. The artiste who has been in the game for over two decades has proved to be one of the successful Ghanaian-based artiste living in the US and has his music rotating all over the US airwaves.

In 2003, Nana NYC experienced his first stage performance at the Miss Ghana New York pageant at Herbert H. Lehman College. After his initial performance, Nana NYC became a well-known performer in the Tri-State area and locked in the name “Nana NYC”, which was first showcased on his MYSPACE page. Today, Nana NYC is influenced by a variety of music ranging from late 1990s hip-hop artistes.

Fast forward to 2018 and NANA NYC is on to newer and bigger things. He recently released his debut album AFROKING OF HIP HOP and it has been doing so well on Apple Music and most of the other online stores.

NANA NYC’s album dropped on Apple Music and was given 7 STARS when it dropped, the most for any artist worldwide.

Currently, the only artist who was close to NANA NYC’s album is US Hip Hop Artist Lil Wayne, who also dropped at 7 stars. Major artists like Drake were given 4 stars.