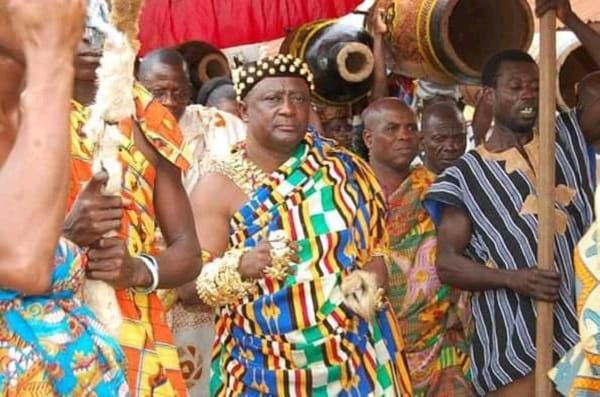 The Sunyani Traditional Council has given a two-year suspension to Oboaman Bofotia Boa-Amponsem, the Krontihene for the Traditional Area for violating customs and traditions by recounting the foundational history of Sunyani without permission.

According to the Council, the Krontihene has presented on various media platforms about how Sunyani was founded contrary to the customs, traditions and usages of the Traditional Area.

In a statement sighted by CFANews, dated April 1, 2022 and signed by the Paramount Chief, Nana Bosoma Asor Nkrawiri II and the Head of the Boahen Korkor Royal Family, Nana Kwasi Obiri Yeboah, copied the Head of the Krontire Family stated that in the Akan custom and for that matter Sunyani custom, nobody has a right to explain or give details of how a particular traditional community is founded.

However, the Krontihene has transgressed this customary law by recounting the foundational history of Sunyani without permission.

“You have represented on various media platforms such as Adom TV, Citi, Facebook and Joy News about how Sunyani was founded contrary to the customs, traditions and usages of Sunyani Traditional Area. ”

The statement added that, “You are an occupant of a stool whose lineage is subservient to the Omanhene and the Boahen Korkor Family at large. You are not a Member of the Royal Family neither did you seek the permission or consent of the Omanhene to grant interviews to the media regarding the historical foundation of Sunyani.”

“Apart from that, you failed to give an accurate or apt account of the historical foundation of Sunyani. You rather sought to elevate your ancestors to a level equal to the originator of the Sunyani community, Nana Boahen Korkor, which amounts to a complete distortion of the traditional history of Sunyani,” the statement further added.

“That notwithstanding, as the overlord of Sunyani Traditional Area whom you have sworn allegiance to at all times during your tenure, I gave you the opportunity by calling on you to retract your words of distortion and apologize to Nananom as required. You have constantly and persistently undermined the stool of Nana Boahen Korkor.”

Henceforth all Sub chiefs under you cease to function as such and all areas under your jurisdiction have been taken away from you.”

“By custom, your stool is hereby “overturned” at the Sunyani Traditional Council until further notice.”