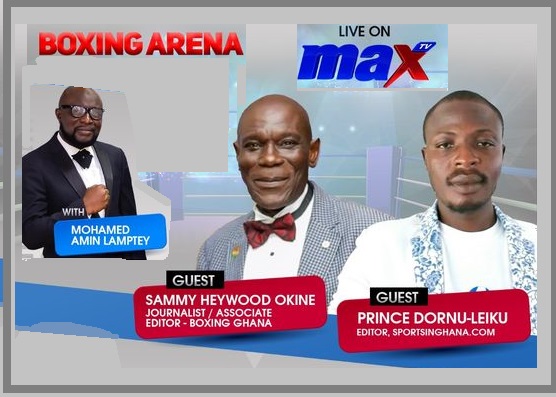 Two sports journalists who are specialized in boxing reporting have commended Imax Media Group and the Ghana Boxing Authority (GBA) for their superb organization of the De-luxy Professional Boxing League which takes place at the Bukom Boxing Arena every fortnight.

Experienced Sammy Heywood Okine and enterprising Prince Dornu – Leiku who were guests of Ace Presenter, Hon. Mohammed Amin Lamptey on the ‘Boxing Arena’ on Max TV on Friday morning both appreciated the efforts of all those involved in putting up the show which is going to the seventh Fight Night.

According to Mr. Okine affectionately called ‘General One’ he personally loved the crowd who fill the seats at the Bukom Boxing Arena on every fight night and the GBA President for listening to suggestions to improve the programme.

Prince Dornu who operates the popular ‘Dornu’s Corner’ on Social Media also hailed the boxers and their trainers for showing up with marvelous performances.

According to General One who is the founder of the Boxing Writers Association of Ghana (BWAG), it is the motivation of winning fantastic prizes as well as media hype that inspires the boxers to put up a great display.

He also commended the referees and judges for fair officiating, by sometimes saving boxers in trouble.

Prince Dornu said the fans have been amazing, and he advised them to maintain and keep up their discipline.

GBA Communications Director, Hon. Mohammed Amin Lamptey who hosts the ‘Boxing Arena’ programme is also the ring announcer and MC of the De-luxy Professional Boxing League. He applauded the musicians who come on the show to entertain boxing fans.

They also discussed the League Table which Fit Square is now leading and some of the outstanding boxers.