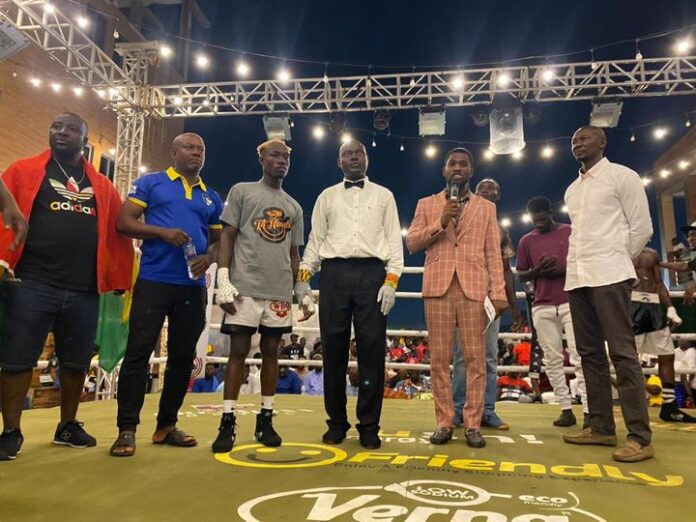 Laryea who was inspired by his manager, Sammy Anim Addo, sitting at the ring exhibited swift Boxing and was really in command of the game with his accurate jabs and hooks.

His defense was so tight that Tagoe could not get through him, though he also bounced up and replied to some of the shots.

Abaja took instructions from coach Carl Lokko and did exactly what he was instructed. If there is any weapon that Laryea used, then it is his confidence.

Backed by most of the fans at the Dezone Beach Resort, he gave his best, and when Sammy Tagoe’s corner decided to stop the contest after round 6. He could not report for round 7 putting Abaja on a new record of his knockouts.

After the bout he thanked his supporters and management as well as technical handlers at the Bronx Boxing Gym.

He challenged the top Featherweight Champions in the world, that his time is due and will come out on them.

He also thanked Paradise Pac Water who supported him before the bout.

Coach Carl Lokko said his boy is ready to face the top boxers in the world.

Mr. Stephen Ashie, President of the Ghana Boxing Supporters Union GHABSU congratulated the Bronx Boxing Champions and urged them to keep on increasing.