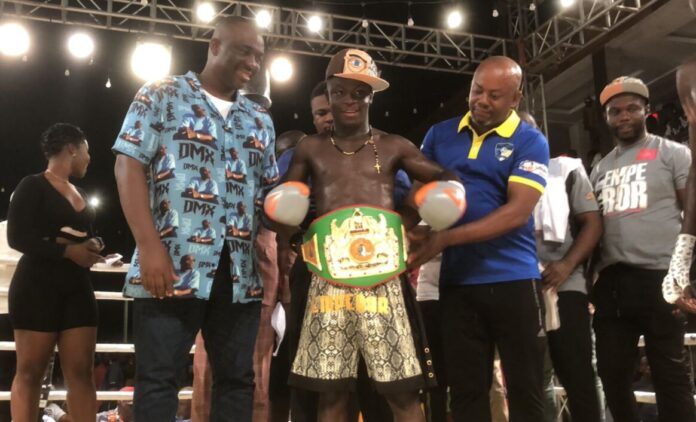 The Night of Great Talents Boxing Show held at Dezone Beach Resort, Korle Gonno on Saturday, November 19th was continued on Sunday, November 20th due to a heavy downpour. The main bouts lived up to expectations.

The exciting packed bill is put to by Bronx Promotions in collaboration with Swavy Blu Promotions saw massive technical knockouts.

In the exciting Featherweight ten-rounder John Laryea, the expensive boxer technically beat hard working Michael Tagoe who gave a good account of himself. Tagoe had a cut in round 6, and his corner advised that the bout should be stopped to save their boxer for another day. Laryea aka Abaja is unbeaten in 12 bouts. He has won 11 and drawn one.

In other fights Nathaniel Sosu could not survive the punches of Sylvanus Tsagli, David Okine lost to Issah Inusah and Issah Awal of The Gym beat Amadu Seidu. and Victori Kemervor knocked out Ray Ansah.

Kpakpo Allotey could not stand the experience of Nat Nukpe from the Volta region.

Heavyweight Champion of Ghana, Osumanu Haruna won his fight after performing creditably with his hefty punches over his opponent, Aduku.

Isaac Dowuona versus Manaf Tetteh, as well as Jacob Dickson versus Paa Kwesi Ankrah, could not come on. Jacob Tetteh Laryea and Sannie Kujulie also did not fight. Coach Carl Lokko was not enthused with the cancelation of the last three bouts.

ALSO READ  Serie A Round of 20 Preview: Napoli host Roma as Inter travel to Cremonese

However, Dezone Beach Resort has proven to be another wonderful venue for boxing and fans had much to cheer.